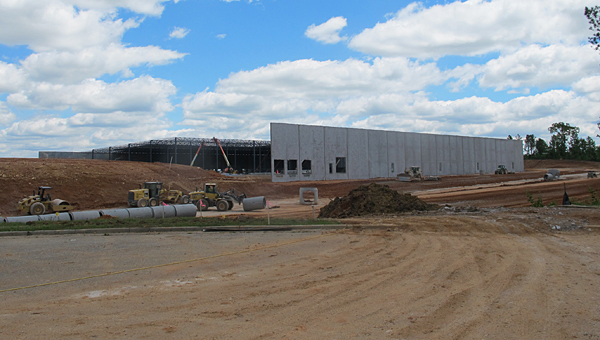 Crews work to construct Hibbett Sports’ new distribution facility in Alabaster in May 2013. The facility will open on July 31. (File)

Alabaster and Hibbett Sports officials will join the Greater Shelby County Chamber of Commerce for a ribbon-cutting ceremony at the new facility at 2 p.m. on Thursday, July 31.

The facility is located at 201 Corporate Woods Drive near the Shelby County Airport, and tours of the facility will be available after the ribbon-cutting ceremony.

Once open, the Alabaster facility will employ about 150, and the company will consider expanding its workforce in the future.

Hibbett chose the Alabaster location in 2012 after looking at several possible sites for the distribution center, including Tupelo, Miss. The new Alabaster distribution facility will help the company keep its stores stocked as Hibbett looks to open hundreds of new locations across the country in the near future, according to Hibbett Sports Executive Chairman Mickey Newsome.