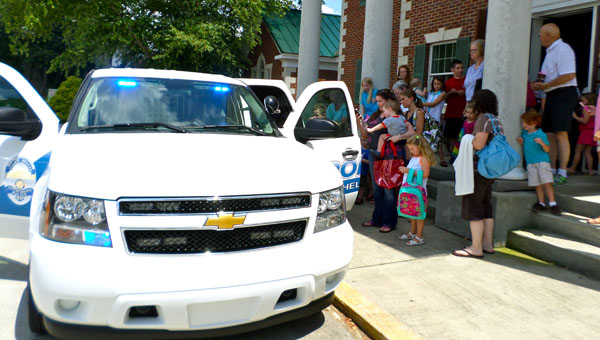 Children got an inside look at a police car during the annual Visit with the Police Department event held by the Jane B. Holmes Public Library on June 25 at Helena’s City Hall. (Reporter Photo / Molly Davidson)

HELENA—“We have a really exciting program today with lots of surprises,” Director of Helena’s Jane B. Holmes Public Library Daniel Dearing said to the group of excited children gathered at City Hall for the library’s annual Visit with the Police Department event on June 25.

As part of the summer reading program, the library offers a series of free events each Wednesday, including the Visit with the Police Department. Officer Philip Richards, of the K-9 Unit, and School Resource Officer Duane Traywick explained their jobs and the basics of being a police officer to the children.

“A lot of people think all we do is write tickets,” Richards said, explaining police officers do a lot more, such as solving crimes and keeping people safe.

“The main thing we want to do is help people,” Traywick said.

The officers showed the children some of the “tools on their belt,” including expandable police batons and handcuffs. They also explained arrests in a kid-friendly manner.

“It’s like a timeout,” Richards said, explaining people get arrested when they break the law and “do something bad.”

Bak, Helena’s 8-year-old police dog, surprised the children with a visit and a demonstration of his powerful sense of smell.

“If someone is hiding something from us, he can let us know, and we’ll go retrieve it,” Richards said as the children watched Bak search for and find an object hidden in the room. “That’s how a police dog does his job and saves the day,” Richards said.

To conclude the event, the children were led outside to explore a police car. The officers showed the children the front and back seats of the car, and even allowed them to take the drivers seat and test out the car’s loudspeaker.

“We’re so thankful to the Police and Fire departments here in our city,” Dearing said. “They give us such a great free program.”

Alabaster’s Kids First will offer free meals to kids this summer and during the school year. (File) By NEAL WAGNER... read more