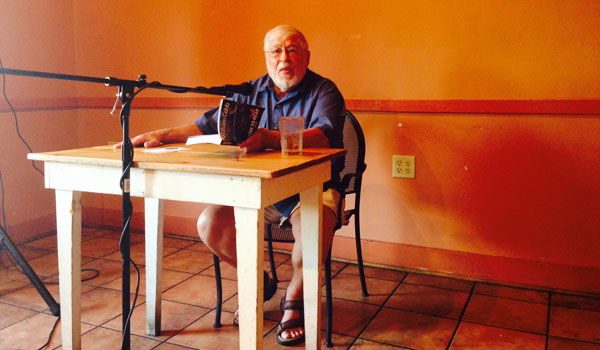 William Cobb reads the prologue from his newest novel, “A Time to Reap” during a June 25 book signing at Eclipse Coffee and Books in Montevallo. (Ginny Cooper McCarley/Reporter Photo)

“Three years ago, an image just kept coming to me. I knew it was a little boy saying, ‘My mother fell from the sky.’ I just didn’t know what that meant,” Cobb said. “I wrote the novel to find out.”

The story follows the fractured Founier family, as they each deal with their own struggles during the Vietnam War. The point of view moves between Patrick, who is fighting in Vietnam, and his estranged wife and three children at home in Louisiana.

New York Times bestselling author Pat Conroy heralded the novel as Cobb’s “finest yet, a beautifully rendered and unforgettable masterpiece of love in the time of war” and author Cassandra King wrote that the book is “so beautifully written that it takes my breath away.”

Cobb, who has served as a professor of English at the University of Montevallo for more than 36 years, said the novel is essentially one about “survival, courage and addiction.”

Both the mother and the father in the novel struggle with alcoholism, a theme that runs throughout Cobb’s published work.

“Most of my work has to do with alcohol, because I am a recovering alcoholic. I know about that,” said Cobb, who has been sober since going to rehab in 1984.

However, the novel, which Cobb dedicated to his sister who died of cancer, is about something much greater.

“Ultimately, the novel is about redemption,” Cobb said.

By NEAL WAGNER / Managing Editor A 49-year-old Alabaster man is being held in the Shelby County Jail on bonds... read more