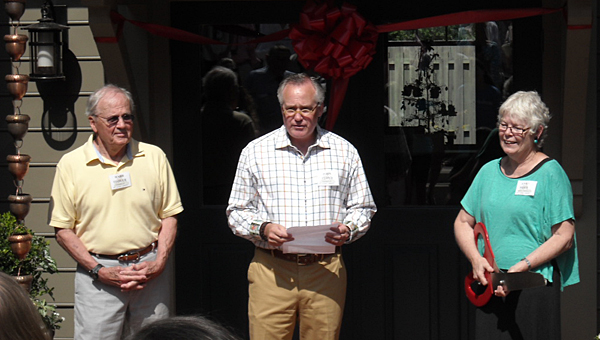 After a brief speech by John Floyd, board member of The Friends of Mt Laurel Library, Chairman Anne Price lifted the ceremonial shears and snipped.

“She’s really the reason this has come about,” Katie Guerin, library director at North Shelby Library, said of Price.

Headed by Price, the Friends group organized the Dunnavant Valley fundraising events and collected major contributions that assisted in the construction of the library. The Friends group also acquired the donations that provided its furnishings.

According to board member Ward Tishler, the dream to build a library began with Mt Laurel founder Elton Stephens, who had hoped to have a library in the town.

The town’s first library was a wooden shelf offering a small selection of books in Jimbo’s Soda Fountain.

After seven years of fundraising, the building was finally constructed.

The Mt Laurel Public Library, which reflects Mt Laurel architecture, features a commemoration brick entryway, upon which are inscribed the names of their donors. Art and furniture donated by the community adorn the interior.

Accompanying each donation is a card honoring the donor.

A rentable community room will double as a second reading room.

Two computer workstations are available for research and reference.

“We’ve had a temporary library for years. With this one, we’ll be expanding our hours and services,” explained Price. “Beginning July 7, we’ll be open six days a week.”