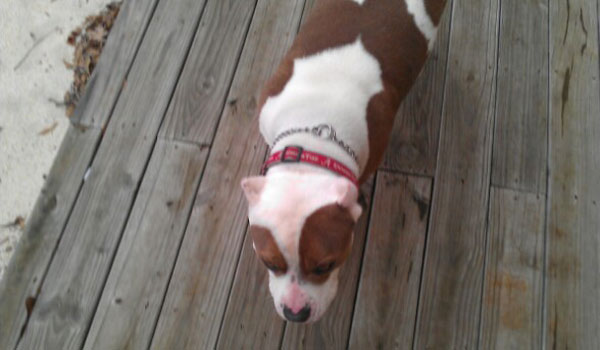 Bruiser found his forever home after wandering up to the golf pro shop at the Montevallo Golf Club. (Contributed)

MONTEVALLO—When an 80-pound pit bull wandered up to the pro shop at the Montevallo Golf Club on June 19, course manager Ed Davis was immediately taken with his precocious personality.

“As soon as you’d sit down in a chair, he’d hop up on your lap. He just wanted to be a lap dog,” Davis laughed. “I’ve never really been a fan of pit bulls because of what you hear, but he’s so friendly.”

The Montevallo Golf Club is no stranger to animals—the club’s first, beloved golf course dog, Oreo, is buried on the first tee after spending almost 15 years on the course. Soon after, Davis adopted a rescue dog, Foxy Lady, during farm day at Montevallo High School.

“She’s still tentative, but she rules the roost” Davis said, noting Foxy Lady likely came from an abusive past.

Even Foxy Lady fell for the stray dog, which Davis named Bruser, and patrons were soon bringing the pup tasty treats such as pork chops and hot dogs.

“I swear he gained five pounds in the four days he was here,” Davis said.

Although Bruser became a favorite with everyone who frequented the course, Davis knew he would not be able to stay at the course full time, so people throughout the city worked together to find a home by posting on Facebook, making signs and calling friends.

On Saturday night, a man and his little boy came to the course to visit Bruser after seeing the signs posted around town.

“(The little boy) just came running up to Bruser, petting him on the head and Bruser was just eating up the attention,” Davis said.

When the man showed pictures of their other dog, sitting on the couch “like he owned the place,” Davis knew Bruser had found his forever home.

As Bruser headed out with his new family, Davis said he was happy at the outcome, but everyone at the golf course would miss their new friend.

“It made my heart feel good to see everybody band together for the dog,” Davis said. “We were kind of sad to see him go.”

Bolstered by the return of seven of its top scorers from last season, the Alabama Frozen Tide looks to increase... read more