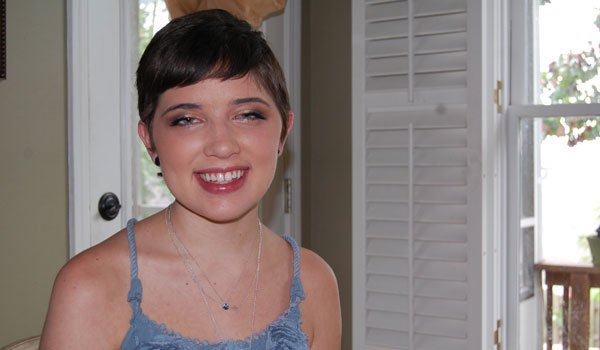 Lauren George is working toward a full recovery after being shot in a Jan. 20 incident in Montevallo. (Reporter Photo/Ginny McCarley)

HELENA—When Kameron George got the call that her daughter, Lauren, had been shot, her mind immediately jumped to the worst scenario.

“It was so scary,” Kameron George said. “I thought, ‘She’s too tiny to survive, there’s no way.’”

Lauren George was shot at a Montevallo apartment complex on Jan. 20. Two 18-year-old men are currently awaiting trial for allegedly shooting and seriously injuring her while attempting to steal marijuana from a third party, according to court documents filed Jan. 23.

A little more than five months later, Lauren George said she is “feeling okay, just taking it day by day.”

Since leaving the hospital on March 14, Lauren George has been working diligently toward a full recovery, attending outpatient speech, occupational and physical therapy three days a week as well as working at home everyday.

Immediately following the gunshot, which entered the left side of her skull, Lauren George was paralyzed on her entire right side and part of her left side. The damage was so severe that surgeons had to remove part of her skull for swelling, which will be replaced by a metal mesh plate later this year. Until the surgery, Lauren George requires help with almost every activity, to ensure no harm comes to her brain.

The first thing Lauren George remembers following the incident was being confused.

“I remember waking up, pulling out my tube and thinking, ‘What’s going on?’” she said.

Simple things such as writing her name, completing addition and subtraction problems and picking up coins have become Herculean tasks for Lauren George, despite continued efforts at therapy.

Lauren George, a graduate of Pelham High School, said the hardest part of the process is “not being like a normal 20 year-old.”

Though she once dreamed of being a cosmetologist, Lauren George does not know if she would be able to stand on her feet for such an extended period of time. Now, she is thinking of one day attending school to be a social worker or a counselor.

“(The injuries) kind of ex-ed out any other options,” Lauren George explained, and said she is “still figuring things out” for the future.

Everything is harder for Lauren George now.

“It’s not like you can just jump in the car and go somewhere,” Kameron George said, explaining that even getting into the car in a complicated process.

Recently, Lauren George had to spend another four days in the hospital when doctors discovered large blood clots in her lungs and legs.

The chest pain from the clots was “almost as bad as getting shot,” Lauren George said, and her mother noted that she turned blue in the emergency room.

Despite setbacks, Lauren George and her family continue to hope for and work toward a full recovery.

“I’ve had faith in God and that’s pretty much gotten me through everything I’ve been through,” Lauren George said. “Also, my mom’s been great.”

Kameron George notes that the family could not have made it through the worst time without the help of family and friends.

“The love and support we had from everyone was so overwhelming,” she said. “We really appreciate everybody.”

The Shelby County Board of Education approved a 5 percent raise for Superintedent Randy Fuller during their June 26 meeting.... read more