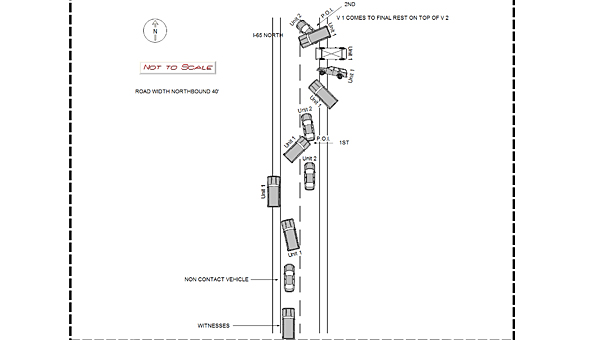 The Alabama Department of Public Safety issued this diagram of a fatal June 20 crash on I-65 in Alabaster. (Contributed)

ALABASTER – A Chevrolet Trailblazer left the road twice before overturning and landing on top of a Toyota Camry in a fatal June 20 crash in Interstate 65 in Alabaster, according to crash data released by the Alabama Department of Public Safety.

In its preliminary crash report, the DPS provided a diagram of the events leading up to the wreck, which killed 46-year-old Montgomery resident Natalie Perez and sent three others to the hospital.

The wreck happened near the 235 mile marker of Interstate 65, which is a few miles south of Alabaster, and closed down the interstate for a few hours while Alabama State Troopers investigated the scene.

According to the wreck report, the Trailblazer was traveling north on I-65 when it ran off the left side of the roadway, causing the driver to overcorrect when steering right back onto the interstate. After driving back onto the interstate, the Trailblazer struck the left, rear corner of the Camry, which was traveling north in the right lane of I-65.

After striking the Camry, the Trailblazer left the right side of the interstate, flipped and then landed on top of the Camry, which had come to a stop in the right lane. Two people, including an 8-year-old, were ejected from the vehicle when it overturned.

The driver of the Camry – the only person in the vehicle – was wearing a seat belt and was transported to UAB Hospital with minor injuries.

In a media release issued on June 21, Alabama Department of Public Safety Public Information Officer Sgt. Steve Jarrett encouraged everyone to wear seat belts when driving or riding in a vehicle.