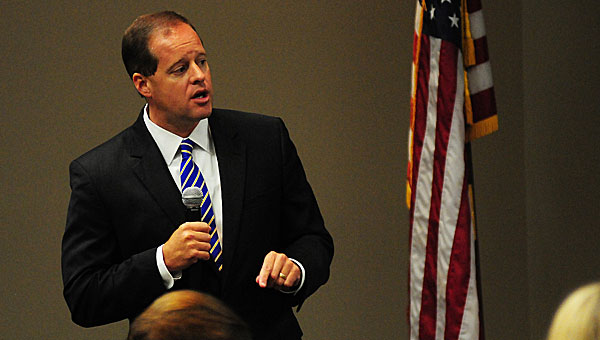 An Alabaster state senator will be looking to shed light on problems and potential solutions with the state and federal prison systems when he testifies before a U.S. House of Representatives subcommittee this month.

State Sen. Cam Ward, R-Alabaster, who has been a proponent of Alabama prison reform for the past several years, will speak before the U.S. House Judiciary Committee’s Subcommittee on Crime, Terrorism, Homeland Security and Investigations on July 15 in Washington, D.C.

During the hearing, Ward said he will discuss Alabama’s prison overcrowding problems in an effort to help Congress address ongoing issues with the federal prison system.

“Alabama has the most overcrowded state prison system in the country, and the federal prison system has problems of their own,” Ward said during a July 2 interview. “They have asked a handful of state legislators to come up and testify.

Over the past few years, Ward has said Alabama’s prisons are at double their intended capacities. If Alabama does not reform its sentencing standards, it faces a federal intervention, which could come with a large cost to the state and could result in a widespread release of prisoners, Ward said.

For the hearing, Ward must provide a written statement to be posted on the U.S. House’s website, and will participate in a question-and-answer session after reading his statement at the hearing.

Ward said his invitation to Washington is indicative of the scope of Alabama’s prison issues.

“You’re having this discussion with Congress. I think that shows what a big deal it really is,” Ward said.

Ward’s invitation to speak in Washington came a few weeks after he was named chairman of Alabama’s Joint Prison Reform Task Force, which will look at ways to reduce the number of nonviolent inmates coming to the state’s prisons.

“Anything that can be done to help prevent a federal intervention will be a success,” Ward said. “We just want to avoid that in any way possible.”