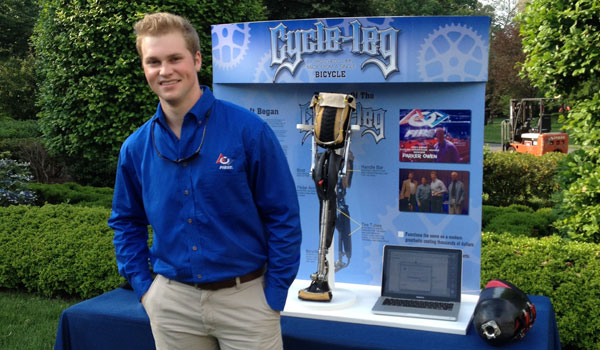 COLUMBIANA—When Columbiana native Parker Owen first built a prosthetic leg from a $25 used bicycle, he had no idea where the project would take him.

He accepted the award in St. Louis, Mo., and visited Kamen’s DEKA Research and Development Corporation headquarters in New Hampshire after a personal invitation from the inventor.

“I met the CEO of Boeing, Coca-Cola and all sorts of big shots,” Owen said.

A year later, Owens was invited to be one of 28 exhibitors at the White House Science Fair on May 27.

“I learned a lot, met a lot of great people,” Owen said, citing on example of a man who visited his booth several times before bringing a friend to look at the display.

“I found out later that it was the president and CEO of Time Warner,” Owen said.

The experience of being a guest at the White House was “pretty cool,” but Owen noted the visit was much like any other.

“It was a little strange—once you get past security, it’s just like any other house,” Owen said.

Owen, who now resides in Auburn, has no plans to stop inventing in the near future.

He recently founded the company Frapz Advertising, with his father, Scott Owen.

Owen also designed a universal prosthetic where a “small, medium or large can fit 99.9%” of people, a large feat considering most prosthetics are expensive and must be custom fit to each person, Owen said.

Since he wanted the prosthetic legs to be accessible to people around the world, Owen created a design that can be printed on a 3D printer with the push of a button.

“You just send them a file and they can print a leg in a matter of hours instead of having to wait for months,” Owen said.

Though he seems like an exception, Owen insists that the great things can be achieved by anyone.

“It’s so easy to do these things, but nobody thinks they have the capacity to do them,” Owen said.

The Arc of Shelby County wins awards at state conference