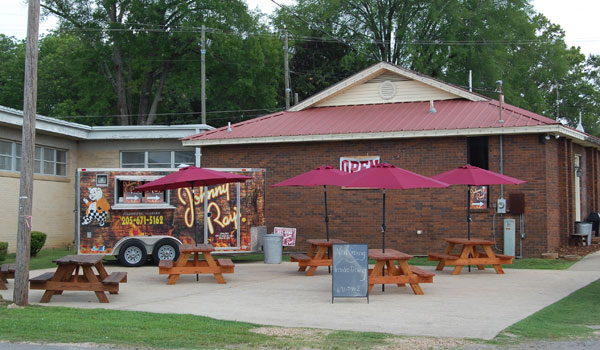 The Columbiana Johnny Ray’s now offers a full-service building in addition to the outside steating. (Ginny Cooper/Reporter Photo)

The company signed a six-month lease on the trailer to “see how things went,” but due to overwhelming community support the restaurant was able to open a full-service site in the adjacent building just shy of four months after they originally came to Columbiana, owner Miranda Carter said.

“So far, it’s been great,” Carter said of their opening weekend. “We were just blown away by the amount of people here.”

The restaurant served over 500 customers during their opening weekend and looks to dish up more delicious food as the menu expands in the new building.

Currently, the Columbiana location serves a truncated version of the menu found in the Chelsea location, but additional items will soon be added.

“We’re working on fried food, that’s what people really want,” Carter said, and noted that the restaurant will add fried catfish and French fries to the menu.

Though the move was not expected to take place so soon, Carter is excited about the possibilities that exist in Columbiana and has big plans for the future.

The restaurant has expanded their hours, and will now be open from 11 a.m. to 3 p.m. on Monday and 11 a.m. to 8 p.m. on Tuesday through Saturday. With the new hours comes the goal to “get more night business in Columbiana,” and Carter has a variety of events planned to prompt customers to visit the new location.

Carter hopes to host events such as a movie night in the grass behind the restaurant and looks to help with the Shelby County Shindig barbecue cook-off on July 19.