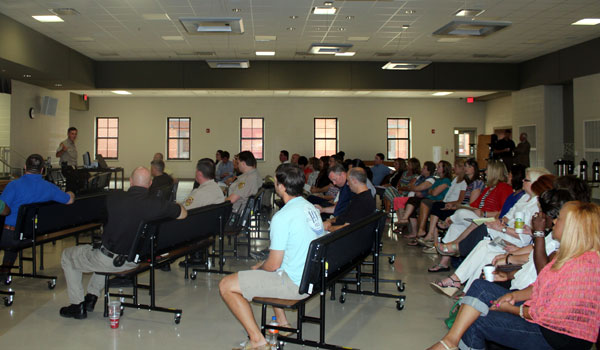 Shelby County Schools are continuing and enhancing the Safe Schools Initiative, first developed in the spring of 2013, for the 2014-2015 school year.

Under the plan, “all schools have the presence of law enforcement throughout the day, every day,” said Dr. Lewis Brooks, assistant superintendent of administration and pupil services for Shelby County schools.

Last year, the Shelby County Sheriff’s Office provided officers for 12 schools in areas that are either unincorporated or in a city that contracts with the county.

“It’s of such a significance to (the community) to have that presence,” Curry said, and noted the sheriff’s office will continue to provide school resource officers in the district.

The school safety initiative is “a collaboration among government entities,” Lewis said.

Shelby County schools will be enhancing safety measures at the entrances of the schools in the district before the 2014-2015 school year.

Under the plan, the schools will either have visitors buzz in or approach a window before entering the schools. Additional cameras will also be installed in the main entrances of the schools.

Safety training is also being offered in the schools. The Shelby County School District recently partnered with the Shelby County Sheriff’s Department to provide an active shooter training workshop on June 30 for school resource officers, administrators and teachers who serve on their local school safety teams.

“Basically, this will be a continuation of the services we started last year,” Lewis said. “We had a very, very positive response. We’ve gotten a lot of great feedback.”