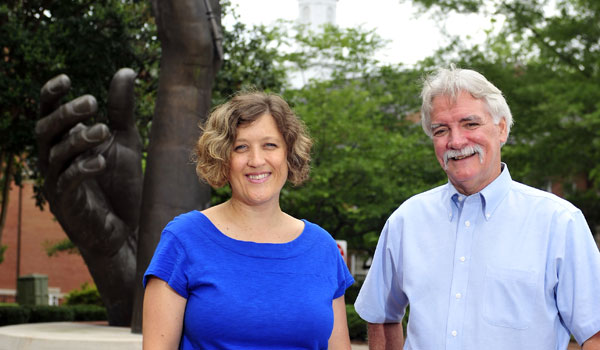 Bryn Chancellor and Ted Metz were awarded fellowship grants from the Alabama State Council of the Arts. (Contributed)

MONTEVALLO—Bryn Chancellor and Ted Metz, faculty at the University of Montevallo, were awarded individual fellowship grants from the Alabama State Council on the Arts.

The grants were given to outstanding artists who create important works of art and make valuable contributions to the state in the disciplines of arts administration, crafts, dance, design, media and photography, music, literature, theater and visual arts, according to a news release from the university.

The funds from the fellowship may be used to create art, improve skills or otherwise enhance the recipient’s artistic career.

Chancellor, an assistant professor of English and creative writing, was awarded a fellowship in literary arts from the ASCA.

She was also recently awarded the 2014 Maureen Egen Writers Exchange Award from Poets and Writers. She has been involved in directing the Montevallo Literary Festival since 2009.

Her short stories have been published in both national and regional literary journals. Chancellor is currently completing a novel tentatively titled “The Magnificent Wilds” and a short-fiction collection, which has been a finalist for the Mary McCarthy Prize and the Bakeless Prize.

Metz, a professor of art at the university since 1973, specializes in sculpture.