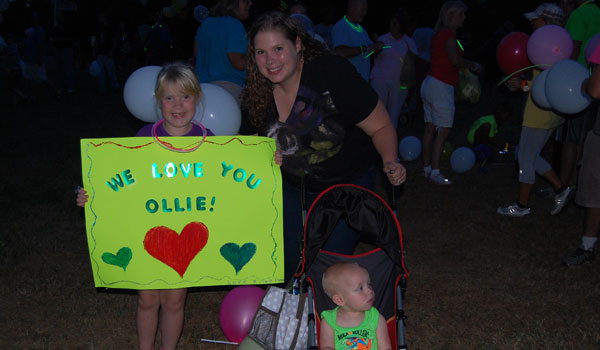 MONTEVALLO—More than 300 people gathered on the lawn of Flowerhill at the University of Montevallo, holding thousands of balloons and glow sticks, to show their support for John Oliver “Ollie” Tetloff.

Ollie Tetloff is a first-grader from Montevallo who is currently fighting neuroblastoma, a neuroendocrine tumor that develops on nerve tissues throughout the body. The cancer has “grown extensively” according to Meredith Tetloff’s blog, Ollieupdates.org, and currently is threatening his brain, lungs and heart.

“The doctors estimate he has a few weeks to two months,” Meredith Tetloff wrote in a June 25 update.

The crowd gathered at Flowerhill walked behind a fire truck bearing a sign that read “Shine for Ollie,” and chanted encouraging cheers throughout the two-block walk. Several police cars followed the crowd.

“It’s about a community coming together, letting Ollie know we’re fighting with him and we’re supporting him,” Williford said.

The crowd carried more than 1,000 balloons and was decked out with more than 5,000 glow items, all of which were donated.

“We want him to know how much we love him,” said Joanne Butcke, a special education aid at Montevallo Elementary School, who marched along with the crowd.

Riley Fletcher, who was in Ollie Tetloff’s first-grade class, and came out with her mother and little brother to show support for her friend.

“We sat together at the same table,” she said shyly. “I miss him.”

Ollie Tetloff, who was also arrayed in glow stick necklaces, bracelet and other paraphernalia, sat outside his home in a wheelchair as the crowd chanted, “we love you Ollie.”

Williford explained that the purpose of the walk was simple.

“We knew we wanted to do something to make him smile,” Williford said. “I though, why don’t we put on a show?”