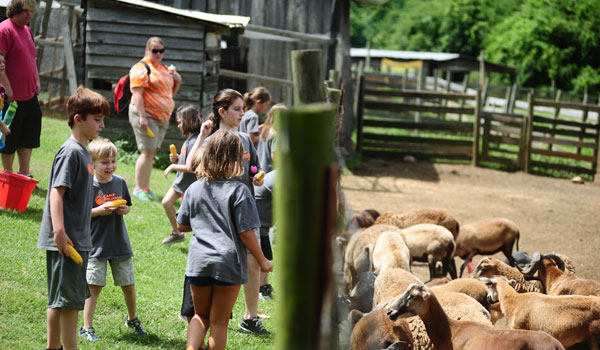 HARPERSVILLE—Eleven students from Primrose School in Helena learned about life on the farm during a field trip to Old Baker Farm’s Summer Days on the Farm.

The students, ranging in ages from 7 to ten years old, shucked corn, fed farm animals, planted sunflowers, hiked through the forest and went on a hay ride during the fun-filled day.

“They love it, and we love it,” said counselor Jessica Little, who accompanied the group. “This one (fieldtrip) we really enjoy a lot because of the trail and activities.”

The students first peeled corn from the cob and listened attentively as Pam Baker, who owns the farm with her husband Jerry, explained the differences between field, sweet and feed corn.

The campers then watched as Pam Baker then put the corn into a sheller, which is more than 100 years old.

“It was brought to our farm 100 years ago, but it was already 50 years old then,” Pam Baker told the students.

Afterwards, the students fed the shelled corn to sheep, goats, roosters, donkeys and horses that crowded close to the fence for the food.

The students then took a hayride into the woods, where Jerry Baker took them on a tour of the forest, pointing out a variety of foliage such as sycamore, persimmon, elm and oak trees.

“Jerry is in his element just doing all of this,” Pam Baker said.

For camper Luke Ferguson, age 8, feeding the goats is the highlight of the trip.