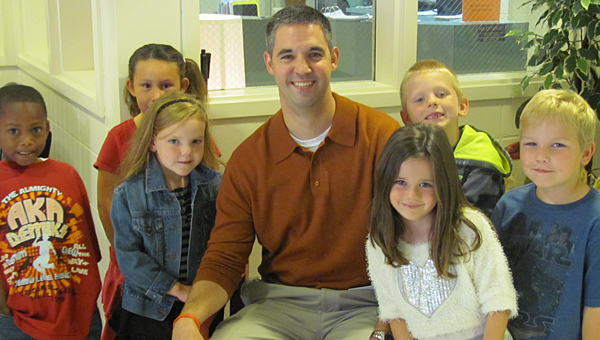 “I told my wife, ‘I feel like LeBron James. I’m coming home,” Byars said with a laugh during a July 14 phone interview, referencing James’ recent announcement he is returning to play for the Cleveland Cavaliers.

The Alabaster Board of Education named Byars the new TIS principal during a special-called July 9 meeting. Byars had been the Creek View Elementary School principal for more than two-and-a-half years when he was named the TIS principal.

Byars began his Shelby County teaching career in 2003 as a fifth-grade teacher at TIS. While at TIS, Byars also coached at Thompson Middle and Thompson High School.

In 2008, Byars, a University of Montevallo graduate, became a sixth-grade teacher at Helena Middle School, and then became an assistant principal at Helena Elementary before moving to CVES in 2011.

Byars said the decision to move from CVES to TIS was a hard one, but he is looking forward to the impact he will have at TIS.

“This is something I applied for, and it’s something I wanted to do,” Byars said. “It was a difficult decision to leave a school with a great faculty, great students and great parent support.

“But I thought about it and prayed about it a lot. When I know God wants me to be somewhere, if I’m not there I know I won’t be successful,” Byars added.

While the Alabaster School System works to fill the principal vacancy at CVES, Byars said he will be working with CVES and TIS to ensure both schools are ready for the upcoming school year.

According to the ACS website, the system will accept applications for the CVES principal position through July 24 before naming a new principal at the school.

“This is a great opportunity,” Byars said. “That transition time from elementary school to middle school is so important, and I’m happy to be able to impact a lot of kids’ lives in Alabaster.”

The Pelham Planning Commission continued a decision on a proposed Burger King on Pelham Parkway during a July 10 meeting.... read more