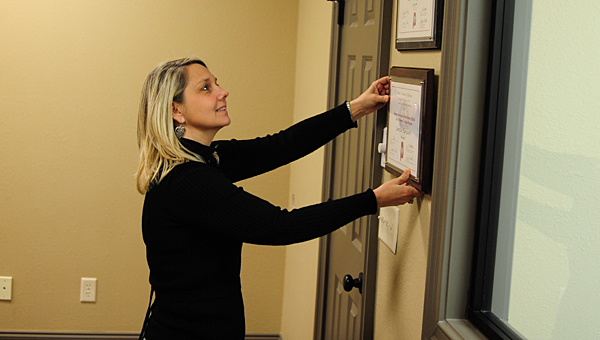 “This is kind of bittersweet, because it will be my last board meeting here,” Tapscott said to the school board members. “I really enjoyed working with you guys. You’ve been really kind to me.”

Tapscott and incoming Alabaster CSFO Linda Agee both cited a desire to move closer to grandchildren in their career changes. During the July 14 meeting, the Alabaster School Board approved Agee as the system’s new CSFO.

“I’ve worked with (Alabaster School Superintendent) Dr. (Wayne) Vickers two times before,” said Agee, who is coming to Alabaster from the Saraland City School System. “I look forward to coming to work with Alabaster and being closer to my grandchildren in Tuscaloosa.”

Agee was one of two finalists interviewed for the ACS financial officer position, and drew praise from School Board President Adam Moseley for her experience with startup school systems and project management.

“This is a quality hire, and she wanted to come to the city of Alabaster,” said School Board member Derek Henderson, noting Tapscott has helped ACS compile a two-and-a-half-month operating reserve account. “We are pleased that she did accept (our offer).”

Tapscott, who was one of the first employees hired by the Alabaster School System in 2013, recently accepted a position as the CSFO with the Muscle Shoals City School System, and said she also is moving to be closer to grandchildren.

“I want to thank (Tapscott) for her tireless effort on behalf of the children of this city. She put in some long, long hours,” Vickers said. “She has done a fabulous job. Muscle Shoals is very fortunate, and her grandchildren are very fortunate.”

Tapscott was a member of the ACS’s “A-Team,” which includes the first several employees hired by the system, which separated from the Shelby County School System in July 2013. After presenting her final financial update for ACS during the meeting, Tapscott presented Vickers with a display case containing the school system’s first telephone.

Up, up and away: Helena author launches flight series