ALABASTER – A 34-year-old Alabaster woman is being held in the Shelby County Jail on bonds totaling $15,000 after she allegedly obtained more than $5,000 in fraudulent Medicaid benefits. 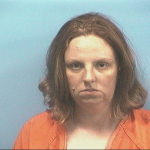 The Alabaster Police Department arrested Angela Hogan Nall, who lists an address in the 1000 block of Third Avenue Northwest, on July 16 and charged her with one felony count of making a false Medicaid claim.

Nall’s arrest came nearly a year after a Shelby County grand jury returned a one-count indictment against her in August 2013. According to the indictment, Nall allegedly fraudulently submitted an “application for a payment or medical benefits from the Medicaid Agency” totaling $5,341.23 from 2009-2010.

According to Alabama law, making a false Medicaid claim is a felony offense punishable by up to five years in prison and up to a $10,000 fine.