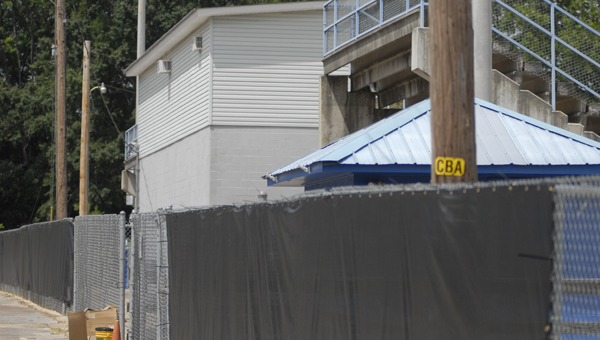 Improvements to Theron Fisher Stadium in Montevallo include a black wind screen around the fences outside the stadium. (Reporter Photo/Drew Granthum)

The grand old stadium on Island Street in Montevallo is getting a makeover of sorts.

Over the course of the summer months, the city of Montevallo, along with the Shelby County Board of Education and Shelby County, are making renovations to Theron Fisher Stadium in preparation for the upcoming high school and youth sports league football seasons.

“A lot of (the renovations) are good on the eye,” Montevallo High athletic director Trey Simpson said. “(It’s) a real clean up just to get it looking good.”

Upgrades include a wind screen for the fences surrounding the stadium, a back drop to hang from the back of the home side grandstand and a resurfacing of the track around the football field, among others.

“It gives us something to be proud of,” Simpson said. “We need facilities our kids can be proud of.”

Simpson also said the improvements to the stadium and other facilities help the city, in that they can serve as a representation of the town.

“A lot of times, (opponents) don’t see the town,” he said. “They see the football field, or the gym. You can control facilities and the way you present yourself and what you present to outsiders and the community.”

Other improvements include new lights to the baseball and softball fields at Orr Park, Simpson said.

Simpson also said the town’s youth leagues, along with the middle school and high school athletic programs have agreed upon a unified logo. The logo will be revealed to the public when the backdrop is installed at Bulldog Day on Aug. 16.

The effort to renovate the facilities was a team effort, Simpson said.

“We’ve had unreal upgrades,” he said. “Everyone’s getting involved. We’re happy. We are so appreciative of the people that have made investments. We’ve had a lot of people believe in Montevallo.”