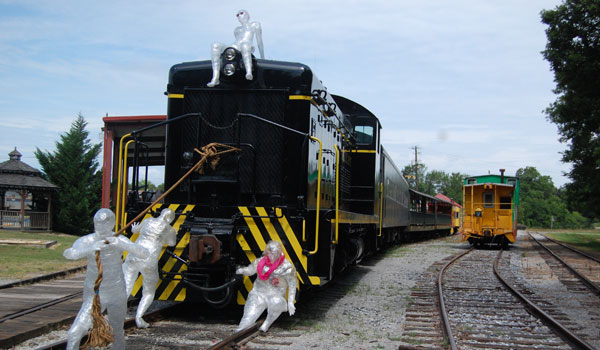 CALERA—Four clear, plastic sculptures worked on the railroad at the Heart of Dixie Railroad Museum on July 15 thanks to students in Ted Metz’s introduction to sculpture class at the University of Montevallo.

Four students from the class created the temporary installation titled, “Struggle up the Railroad,” which was a collaborative effort representing the “struggle with everyday things,” Cherish Roodhouse, a student in the class, explained.

The most difficult part of the project was finding a safe place to install the piece, according to Metz, and the railroad museum was the perfect location.

Jim Garnett, president of the Heart of Dixie Railroad Museum, was immediately intrigued by the idea when students approached him about the project.

“They just showed up one day and explained what they were doing,” Garnett said. “I thought it was kind of unique.”

The installation, which depicts three figures made from clear packing tape pushing, pulling or resting on a railroad car, is “all autobiographical on a personal level,” Metz said.

Roodhouse, whose figure sits atop the car with sunglasses, explained that her figure represents the importance of “accepting the reality of things.”

For student Valarie Smith, her figure represents struggling with burdens. Smith’s character pushes against the train with her back, clothed in a single pink scarf, which signifies her mother’s struggle with breast cancer.

Smith has a heart condition, which she signifies with a pink heart made of strings inside the figure.

“I’ve had to deal with a lot of illness,” Smith said, and noted her figure exemplifies this struggle.

Belle Prosser, whose figure is pushing against the train, said her sculpture is a representation of being her “own antagonist.”

“Whenever I’m trying to accomplish something I’ll get in my own way,” Prosser said.

Student Molly Brooke’s figure stands out in front, pulling the train with a think, brown cord.

“I pull a lot of weight,” Brooke explained. “Sometimes I feel like it’s way more than I can possibly pull.”

The students began the installation around 10 a.m., and the finished product was left up for part of the day.