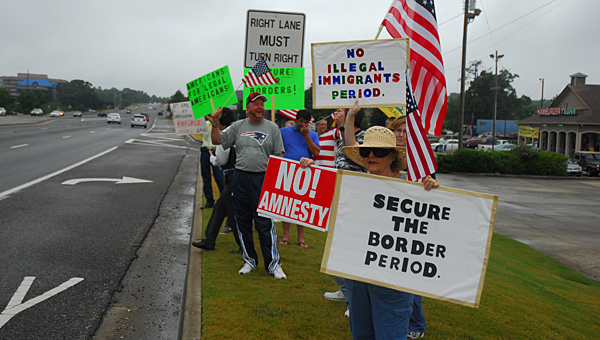 A group protests illegal immigration during a rally on U.S. 280 on July 19. The event was part of the “Make Them Listen” campaign organized across the nation from July 18-19. (Reporter Photo/Neal Wagner)

A group of about 15 protestors waved signs reading “No amnesty,” “Secure the border, period” and “Americans for legal Americans” along the side of U.S. 280 on July 19 through a nationally organized event.

The protest was one of hundreds held across the nation from July 18-19 through the “Make Them Listen” campaign. The campaign is seeking to “close the border” between Mexico and the United States, and is aimed at combating illegal immigration into the U.S., said Birmingham event organizer Deanna Frankowski.

“Our main purpose is to close the border, and then deal with those who are here illegally,” Frankowski said at the roadside protest in front of Walmart on U.S. 280 at about 9:45 a.m. on July 19. “If you’re here illegally, and you’ve got a job and you’re contributing to the economy, we can give you a pathway to citizenship. But we are opposed to outright amnesty.”

The group also held protests in the same location from 7-9 a.m. and from 5 p.m.-dusk on July 18. Frankowski said the group was planning to protest until about 2 p.m. on July 19, and said she expected about 50 people to join the protest throughout the day.

From about 9:30-10:15 a.m. on July 19, dozens of passing motorists honked and waved at the protesters, while a few others shouted profanity at the group.

Mark Scott, the chairman of the Chilton County Tea Party, said he joined the protest because “America is being invaded.”

“The Constitution is what it is. We are tired of the federal government sealing our money to hand out to people who don’t put a dime into our economy,” Scott said as he held a sign encouraging the government to “enforce existing law.” “I’ll fight this until Hell freezes over, and then I’ll fight it on ice.”

Anita Fance and a man who asked only to be identified as “Cornbread” held an American flag and a “Don’t tread on me” flag, respectively.

“Illegal immigration is a slap in the face for those who immigrated here legally,” Fance said.

“There is a right way to come into this country. We’ve got nothing against legal immigration,” said “Cornbread.” “But just flooding our boarders is the wrong way.”