Music on Main gives thanks 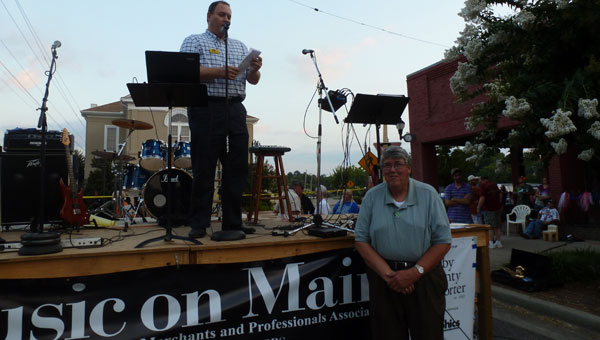 It takes a community to put on Music on Main! Sponsored by the Columbiana Merchants and Professional Association, Music on Main would not be possible without the support of the city of Columbiana, its staff and the sponsors who funded the free Friday night concerts that ended July 11, 2014.
Music on Main tried new ideas this year, some good, some not, but CMPA’s mission is to bring the best free entertainment in a safe family friendly environment. Daniel Holmes, creative genius of the Shelby County Reporter, designed the new logo, and the SCR daily advertised Music on Main on its webpage to get the word out.
Scott Owen of Sign Graphics made and donated the stage banner and street signs. Bruce Andrews, executive director of the Shelby County Arts Council, booked the bands and sound. A new stage was built thanks to the craftsmanship and generosity of Red Robinson.
Mayor Stancil Handley, Columbiana Police Chief Lamar Vick, Street and Sanitation Head Allen Reynolds and their staffs were simply invaluable to Music on Main. The street staff, on their own time, put up, took down and cleaned up the street every week. They were simply amazing. The police closed and open the street without one problem incident. Mayor Handley not only was generous as a sponsor, but supported Music on Main with any help needed.
It is expensive to bring three and half months of free concerts to Main Street. Without the sponsors who donated the money, Music on Main would never be possible. A huge thank you to our sponsors:
BASS: Shelby County Reporter
TENOR: City of Columbiana, Sign Graphics, Mayor Stancil Handley
BARITONE: Alabama Power, Brown Lumber, Bryant Bank, Davis Drug, Johnny Rays BBQ, On Time Promotions, Piggly Wiggly, Renasant Bank. Rux Carter Insurance, Wallace, Ellis, Fowler, Head and Justice
SOPRANO: Michael Atchison, Attorney, Bernie’s on Main, Busy Hands Framing and Gifts, IPT Physical Therapy, Gene and Judy Quick, Shelby County Abstract and Title, State Farm Insurance Craig Doris
ALTO: Allstate Insurance Patrick Robinson, Dr. George Andrews, Nancy Davis, Donald Real Estate, Gail’s Florist, Diane and Andrew Moore, Dr. Tim Nettles
FRIENDS: Linda Ackley, Beverly Hall, McClelland Law LLC, ReMax Brian Thomas
Please thank those who made Music on Main possible, for without them there will be no Music on Main next year.