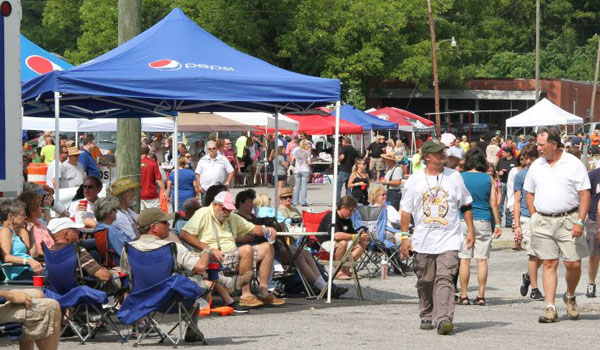 The event, which took place in downtown Columbiana on July 19, featured 15 barbeque teams competing for a variety of titles as well as live music, vendors and family-friendly activities.

Approximately 1,000 people attended the event throughout the course of the day, Andrews said, which as many as 450 present at one time.

The event raised $7,200 to benefit the Shelby County Arts Council and the South Shelby Chamber of Commerce.

“There are probably easier ways to make that money, but we wanted to do something to bless the city of Columbiana and something to build on,” Andrews said. “We just want to have a fun event to bring people to town.”

Though rain was forecasted for the event, only a slight mist fell in the morning, which Andrews called a “miracle of God.”

“Friday, it looked like all was lost,” Andrews said, and noted three vendors and two teams who paid for the event did not attend, likely due to the forecasted rain.

“There are a lot of things we’d do a little bit different,” Andrews said, noting the organization would look into improving the tasting aspect of the challenge and garner more input from the barbeque teams.

Teams were awarded prizes based on judge and crowd results.

By NEAL WAGNER / Managing Editor COLUMBIANA – A 50-year-old Childersburg man will spend the next 15 years in prison... read more