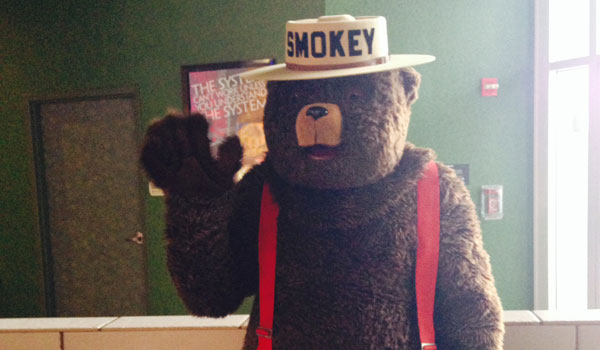 Smokey Bear appeared at the Carmike Lee Branch 15 on July 18.

Smokey Bear made a guest appearance at the Carmike Lee Branch 15 on July 18, to visit those viewing the new Disney Pixar movie “Planes: Fire and Rescue.”

Smokey Bear’s appearance served to “promote fire safety” and “get the word out about the Alabama Forestry Commission,” said Scott Sweat, a ranger technician in St. Clair County who accompanied the mascot.

Wildland fires are usually most abundant during the spring, from the end of February to the first of April, and from September to Thanksgiving, Sweatt said.

To prevent fires, Sweatt encouraged children to not play with fire, and adolescents and adults to make sure campfires are fully extinguished and to never leave any fire unattended.