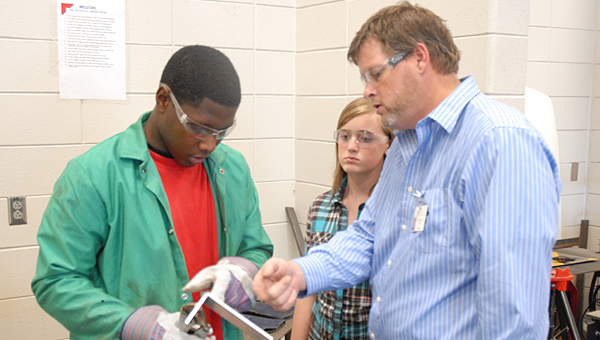 Calera teacher Brian Copes (right) is preparing to kick off the engineering program at Thompson High School for the 2014-2015 school year. (File)

ALABASTER – Thompson High School has welcomed Brian Copes “with open arms” over the past few weeks, and the Alabaster School System is adding a trio of engineering classes for the upcoming school year.

The Alabaster Board of Education voted to hire Copes, the former Calera High School engineering teacher, during a June meeting, meaning the engineering classes were not listed on the initial THS 2014-2015 course cards.

“THS will give anyone interested the opportunity to learn more about (the THS engineering academy) during registration,” read a July 18 post on Alabaster City Schools’ Facebook page.

Copes will be available during THS schedule pickups on July 28-29 to answer questions about the school’s new engineering classes, and students will be able to request placement in the ACS engineering academy for the upcoming school year.

“There will be no charge for making this request change, but space will be limited and there is no guarantee that the request will take place,” read the post.

Foundations is an entry-level class, and is a pre-requisite for other engineering classes, applications will teach students to design on the SolidWorks engineering software and research and design is recommended for juniors and seniors, and will involve designing and fabricating a vehicle from the ground up.

Copes said his classes contain a community service aspect aimed at helping those in need locally and throughout the world.

“We go out and find needs in the community, and we fill them,” Copes said.

ACS Coordinator of Curriculum and Instruction Cena Dais said the school system has already received inquiries from those interested in enrolling in the engineering academy, and encouraged everyone who is interested to inquire early.