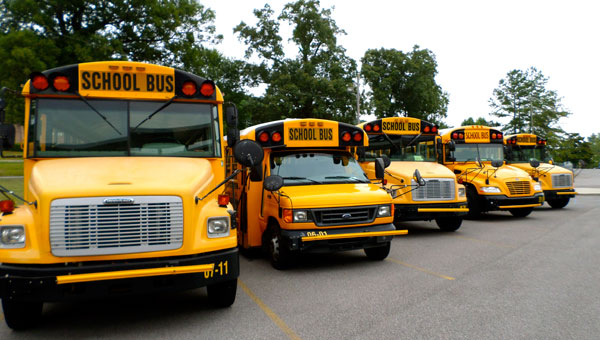 Pelham City School’s freshly painted buses sit ready to go at Valley Elementary School. Getting the buses ready is just one of the many important details necessary for the success of PCS. (Reporter Photo / Molly Davidson)

Less than one year ago, the Pelham City Schools began as “five people in an empty room,” Board of Education President Rick Rhoades said. Since then, PCS has turned into a school system with a superintendent, growing central office staff, four campuses and talented teachers and principals.

This past week, I visited Pelham City Schools Transportation and Career Tech Coordinator Floyd Collins at the school system’s offices in City Hall. While speaking with Collins, I began to realize how much truly goes into a project like the Pelham City School System.

While we all recognize the large milestones, such as the separation agreement and the transfer date, there are hundreds of small things as well that are just as essential.

During a July 14 Board of Education meeting, Child Nutrition Program Director Grace Perry announced after weeks of work, she had been able to negotiate meal prices to $2.50 for elementary school children and $2.75 for middle and high school children. Similarly, Collins has been working tirelessly to coordinate buses, drivers and routes for the new school year.

While school lunch and buses may not seem as monumental as a separation agreement, both are essential to the functioning and success of a school system. And there are many others working behind the scenes as well.

Without the hard work and dedication of every person, from Superintendent Dr. Scott Coefield, to each teacher, to all the staff working to clean and prepare the facilities for students, the Pelham City School system would not be where it is today.

Only seven months after the five Board of Education members were sworn in, the Pelham City School System is ready to open its doors to students on Aug.7.

“You all want to excel, you want to do everything to be above for your students… for your community,” Dr. Marcia Burke said, summing it up perfectly during a July 2 Steering Committee meeting. “We are on time, and I wouldn’t expect anything less from Pelham.”

By NEAL WAGNER / Managing Editor A Shelby County Circuit Court judge will decide in September if he will uphold... read more