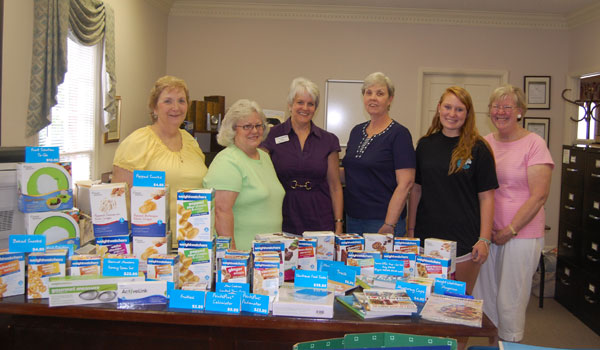 Currently, 17 people have tentatively signed up for the class, according to member Phoebe Robinson.

Robinson has participated in Weight Watchers for two years, losing a total of 40 pounds during the process.

“I’ve got at least 10 more pounds to go, and I’m just not going to give up,” Robinson said.

Robinson accredited much of her success with the program to the group meetings.

“For everybody that goes to Weight Watchers, the meetings are key,” Robinson said, noting the meetings provide “camaraderie and support.”

Vera Rosenow, who is the instructor for the class, lost 35 pounds using the program and has been a leader for 37 years.

“She’s not only motivating, but also gives helpful hints and recipes,” Robinson said.

The program is about learning moderation, Rosenow said.

“You learn to eat well-balanced, regular food,” Rosenow said. “I am able to have the things I like in moderation.”

The current group of 15 people has lost more than 640 pounds in the last 30 weeks, Robinson said.

For a group of 15 students, the class is $156 for 12 weeks. If 20 or more students sign up for the course, the class is $186 for 17 weeks. The price of the class includes eTools, an application that can be used on a smart phone, iPad or computer, which includes a number of tools including a food and activity tracker, a database of food and recipes and workout videos and tips.

Lawsuit against Alabaster on hold

The South Grand View Development company sued the city of Alabaster in January. The lawsuit currently is on hold. (Contributed)... read more