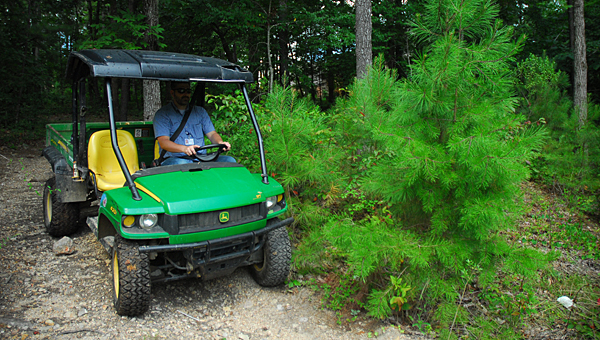 “I tell you, the spiders are out today,” Atkins said with a laugh as he piloted the vehicle through a network of both well-worn and overgrown trails stretching throughout a more than 300-acre tract of land between Kent Dairy Road and Thompson Road on July 23.

In a few years, portions of the heavily wooded land will give way to a 360,000-square-foot high school and athletic complex, along with a road infrastructure to handle the nearly 1,800 Thompson High School students.

“The roads will be a major aspect,” Atkins said as he pointed out potential access points on Kent Dairy Road and Thompson Road. “We want to make sure the access points are safe.”

Once the new school is built, the access points likely will be across from the Thompson Road-Ashford Lane intersection and near a large white water storage tank on Kent Dairy Road, Atkins said. 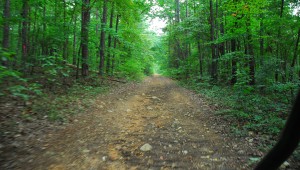 Because the new high school and athletic facility will occupy only a portion of the currently vacant property, it will allow ACS to provide a “buffer zone” between the school and the several neighborhoods surrounding the property.

“There will be a big buffer zone between the school and all the houses,” Atkins said, noting the Thompson Middle School property could fit in the 300-acres “about 20 times.” “Our plan is to build a stadium that’s recessed into the ground, which will funnel all the noise upward. We want to be good neighbors and minimize the noise impact.

“As the crow flies, the new stadium won’t be that much farther down than it is now,” Atkins added.

ACS leaders have not yet decided where on the property the new school will be built, and are awaiting the results of land surveys and architectural drawings before finalizing the exact location. Alabaster School Superintendent Dr. Wayne Vickers previously said the school system is looking to have the new THS constructed within two years.

In late June, the Alabaster City Council voted to lock in a 2011 penny sales tax increase for the next 30 years to allow ACS to secure a $120 million bond issue to construct the new high school and make significant renovations to the city’s existing school buildings.