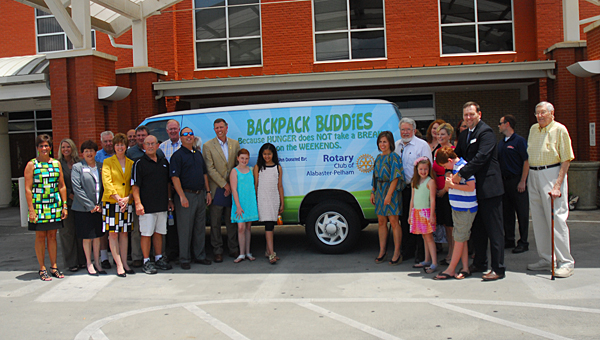 ALABASTER – The first time Backpack Buddies Program Director Stephanie Grissom saw the large new cargo van pull up at the program’s headquarters off Valleydale Road, she was unable to hold back the emotions.

“The first time I saw it, I was in tears,” Grissom said. “We’ve waited for years for a van, and now we’re over the moon.”

Backpack Buddies serves thousands of children in school systems in Shelby and St. Clair counties by providing meals and snacks for local students who otherwise may go hungry.

The van, which is wrapped in a livery featuring Backpack Buddies and Alabaster-Pelham Rotary Club logos, will allow Vineyard Family Services to deliver significantly more “buddy bags” to area schools. Before the organization received the van, Backpack Buddies staff members used their personal vehicles to make the deliveries.

“We are going to be able to serve significantly more kids,” Grissom said, noting Backpack Buddies will deliver about 30,000 buddy bags to schools by the end of the year.

The Rotary Club purchased the van for Backpack Buddies in May using money generated during the club’s 2013 Southern Christmas Bazaar at the Pelham Civic Complex.

“It’s very exciting to see Rotary come together with our community to fulfill a need that is so real for so many kids,” said Rotary Club President Debbie Parrott, noting Shelby Baptist Medical Center’s title sponsorship of the Christmas Bazaar played a large role in the event’s success.

“This is by far the greatest gift we’ve ever received,” Williams said.