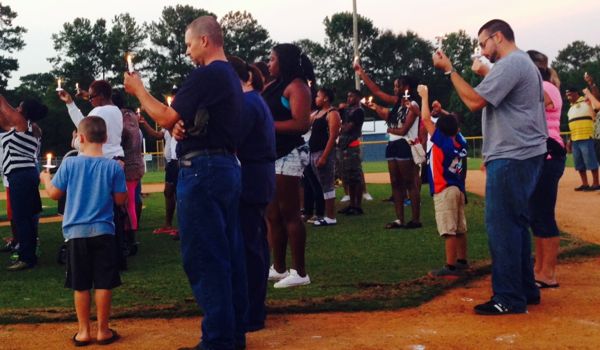 MONTEVALLO – More than 50 people gathered on a baseball field at Stephens Park to honor the life of Brayden Ethan “Sumo” Hudson, a five-year-old Montevallo boy who died July 13.

Hudson was attending a birthday party at Brierfield Ironworks Park on July 11 when he jumped or fell in the pool, Bibb County Coroner Downey McGee explained. Hudson was pulled from the pool and the lifeguards attempted to resuscitate him. Hudson was then taken to Bibb Medical Center and subsequently flown to Children’s of Alabama where he was pronounced dead on July 13.

“He was very smart and very bright,” one of Hudson’s coaches said. “I miss him and he was a good kid.”

Another coach noted Hudson always sported a smile, no matter what the circumstances.

“Every game, he was our first batter. He was a real smart baseball player,” he said. “He was just an all-around good kid, and he is definitely going to be missed.”

As the sun set, candles were passed out and lit in remembrance of Sumo’s life.

“Though we leave tonight and this candle will go out, the light (Sumo) left in our life will never go out,” Pastor Young, a speaker at the event, said.

Reverend Larry Coleman offered a short message at the end of the vigil, highlighting Sumo’s life and legacy.

“Our little brother lives on,” Coleman said. “His life lives on through the folks that are standing here.”

Coleman also spoke of Hudson’s cheerful nature, and encouraged those at the vigil to strive to emulate his life.

“We need to carry his message, his lifestyle of love,” Coleman said. “Let’s keep loving each other.”

Santa speaks with a member of the Alabaster YMCA during the branch’s Christmas in July event on July 25. (Reporter... read more