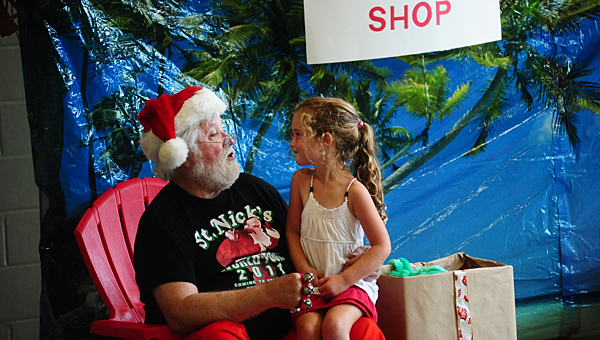 Santa speaks with a member of the Alabaster YMCA during the branch’s Christmas in July event on July 25. (Reporter Photo/Jon Goering)

ALABASTER – With exactly five months to go, Alabaster YMCA camper Nora Langstoner hadn’t gotten a chance to put together her Christmas list yet.

“I still need to think about it,” Langstoner said after she pondered for a moment.

Langstoner was among dozens of YMCA campers who got a chance to celebrate the holiday several months early during the YMCA’s Christmas in July event.

During the event, kids packed the Alabaster YMCA’s gymnasium while building snowmen out of ice cream, designing their own snowflakes and even getting a chance to put in a good word with Santa Claus as he hung out at “Santa’s Surf Shop.”

“I told him I’ve been good, and that I can be good from now until Christmas,” Langstoner said.

Fellow YMCA camper Madison Jackson also said was trying to get on Santa’s good side early.

“I told him I’ve been good for Christmas,” Jackson said, noting she hadn’t yet started thinking about items for her Christmas list.

None of the kids at the July 25 event seemed to second guess Santa’s arrival in Alabaster five months ahead of schedule.

Alabaster YMCA Director Rhonda Elmore said the event marked the end of the branch’s holiday week, which brought a different theme for each day of the week.

“We’ve probably already had 150 kids come through to have their pictures taken with Santa,” Elmore said about an hour after the event began. “They are so excited.”