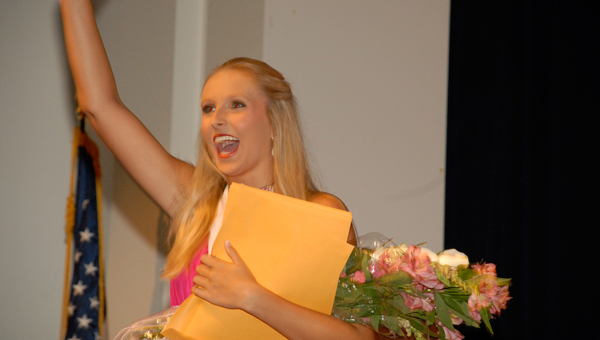 Brooklyn Holt was named the 2015 Distinguished Young Woman of Shelby County in a July 26 competition. (Contributed)

“I’m so excited and still in shock,” said Holt. “I’m just waiting for it to sink in.”

The competition is composed of five categories in which the young ladies are evaluated by a panel of five judges. Categories include scholastics, interview, talent, fitness and self-expression.

Every year since 1958, young female high school seniors from each state participate in the scholarship program.

Regional winners move on to state level competition, and if crowned, ultimately compete at the national level in Mobile for a share of more than $130,000 in cash scholarships and representation of the national program.

Shelby County has offered the program since 1978.

“We’ve had three girls in the last four years win state and coincidentally go on to winning first alternate at nationals,” said DuBose. “Shelby County just has some awesome students, and we get to highlight them.”

This year’s competition consisted of 10 contestants, and resulted in a total of $10,000 in cash scholarships allocated to several participants.

Lauren “Nikki” Sullivan placed first alternate and Stella Christine Kontos placed Second Alternate. Both are students at Briarwood Christian High School and played the piano to showcase their talent in the competition.

For her talent performance, Holt sang “You’ll Be In My Heart” from Walt Disney’s “Tarzan.” The song, said Holt, was an arrangement by Bill Wolfe.

Placing first was no easy task for Holt. Besides the overlapping contest and band practices, she consistently alternated, Holt faced the challenge of recovery from a recent car accident that could have claimed her life.

“I’m lucky to be alive,” she said. “Thankfully, I was able to overcome that obstacle and compete… I’m absolutely thrilled and blessed to represent these phenomenal girls I competed against.”

Holt will be competing for the Distinguished Young Woman of Alabama title in January 2015.