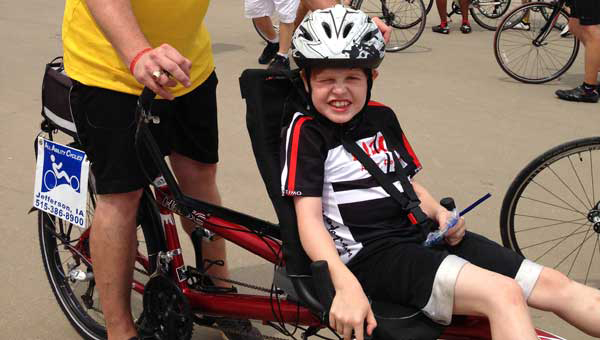 Gabe Griffin rides with his dad, Scott Griffin. This bike was designed especially for Gabe so that he could participate in the cross country Ride 4 Gabe Fundraiser. (Contributed.)

By Linda Long/For the Reporter

In a crowd of kids, Gabe Griffin stands out.  He’s the one with that mop of red hair, dancing blue eyes, and a smile about a mile wide. Like most 9-year-old boys, he loves to go bike riding with his dad, the sun in his face, the wind at his back. But Gabe is not most 9-year old-boys, and today, and this bike ride is not your typical Saturday outing.

Gabe and his dad Scott Griffin are literally pedaling for their lives.  They are part of an entourage traveling on 418 miles of Iowa back roads climbing 11,318 feet of sharp incline, a tough challenge by any estimation, but not nearly so tough as the one facing Gabe’s parents, Scott and Traci Griffin.  Their mission is to change the course of Duchenne muscular dystrophy, the disease out to kill their son.

Raising money to fight and creating awareness of this fatal disease is what places Scott in a cornfield in Iowa in July, driving an RV to accompany two cyclists who are pedaling their hearts out to spread the word about a little boy with a big battle ahead of him.

The cyclists are Michael Staley, an Alabama resident who works in Washington, D.C., as an aid to Congressman Spencer Bachus, and Indiana University student Wes Bates of Aurora, Colorado, whose family lost a close friend to Duchene’s.  They are participating in Ride4Gabe, a cross-country bike trek that is taking the Hope 4 Gabe foundation entourage from the Pacific Ocean to Mobile Bay.

They made a detour to visit Iowa, which was 700 miles out of their way, to participate in The Register’s Annual Great Bike Ride Across Iowa. The annual event is organized by the Des Moines Register and is one of the largest rides in the country.

“It also allows Gabe to be part of the experience,” Scott said. “A group out here called All Ability Cycles built (a) bike for him to be able to participate.”

Gabe joined the Ride4Gabe team in Iowa to try out the bike, which has two seats. Gabe sits in the front, while Scott or another cyclist pedals.

The Ride4Gabe cyclists will be back in Alabama by mid-August after pedaling more than 3,300 miles for a little boy they didn’t even know until just a few weeks ago.

“After meeting Gabe and learning about Duchenne, it was clear to me that God put the Griffin’s in my life for a reason,” Michael said. “The challenge of cycling over 3,350 miles in 50 days is nothing compared to the struggles ahead for Gabe.”

What is Duchenne muscular dystrophy?