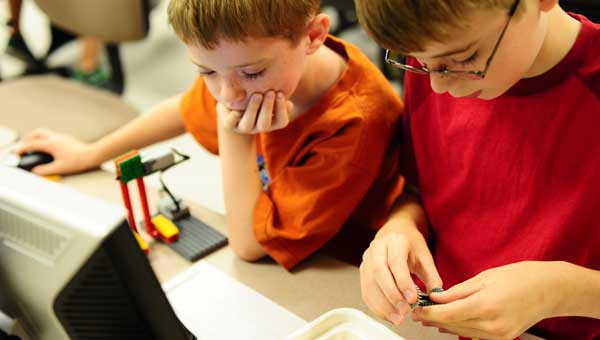 Levi and Jackson Snellgrove work on their project, a Lego kicking machine, during the building portion of a competition at a Lego Camp at Jefferson State Community College in Hoover. (Photo by Jon Goering.)

HOOVER – On a hot July day, a giant slumbers in a forest. Meanwhile, a crane attacks a military base and a ninja takes on a band of evil men.

It was all in a day’s work for the students attending a Lego Robotics camp at Jefferson State Community College’s North-Shelby campus.

“Basically, they’re trying to get us to be a little creative and what we would write if we were making a sequel to the Lego movie,” said Mitch Jones, a 12-year-old student at Briarwood Christian School.

The college held two Lego Robotics camps for 8-12-year-old students in July. The students spent four days building Lego designs with pulleys, belts, motors and more. Using a computer program, the creations were able to move, such as when a crane lifts the sleeping giant.

“It’s not just playing,” instructor Michelle Darabaris said. “The number one thing I think they got out of it is problem solving.”

Darabaris said the students learned math, science and basic engineering, not to mention strengthening their writing skills by writing the screenplays.

Throughout the week, the class faced off in different competitions. They created Lego goalies, and competed to see whose Lego creation could kick a ball the farthest.

On the final day, they wrote screenplays and built the corresponding elements to create the movie, such as the sleeping giant that wakes up or a sailboat that rocks on the ocean.

For Anthony Hill, a 9-year-old Green Valley Elementary School student, the camp was the perfect combination of learning and fun.