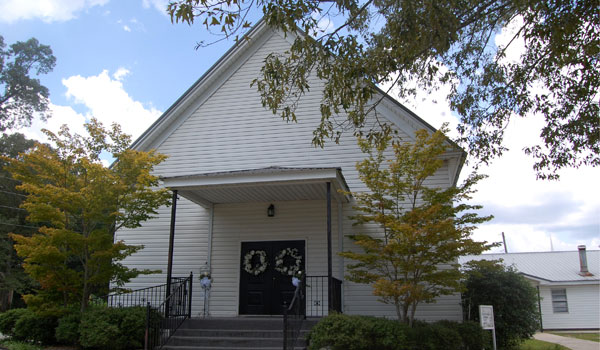 Members of the Union United Methodist Church are working to restore the chapel and cemetery. (For the Reporter/Ginny Cooper McCarley)

Walton is part of a six-member committee of women in the church who have “taken an interest that the old church grounds are kept up and ready for functions to be held here,” she explained.

Through donations, they were able to outfit the old chapel with new carpet, paint, a sound system, crown molding, ceiling tiles and decorations. The repairs began in early January, and though the building is aesthetically complete the project is “ongoing,” Walton said.

“We just gave it a total facelift,” she explained

Since the renovations the church has hosted a homecoming, two weddings, two funerals and the Ms. Senior Alabama pageant.

One particularly special wedding the women organized was for a military couple that only had 10 days together.

“They couldn’t use their own church, so we donated the use of the chapel,” Walton said, noting the ladies worked to decorate the space for the special event.

“It was fun for us to be able to give them a beautiful wedding,” Walton said.

Outside the chapel lies a cemetery, which has a history of its own. The oldest grave on the lot belongs to a woman who was born in 1801 and died in 1853, and the rolling hills contain graves of several who lived during the time of the Civil War.

Members of the church are in the process of repairing the cemetery as well, by leveling, repairing and replacing the foundations of some of the old stones and repairing damaged headstones.

“Several cars come everyday with people just wandering through the cemetery,” Walton said, noting the grounds encompass at least five acres. “It’s an ongoing project as well. We just started working on it.”