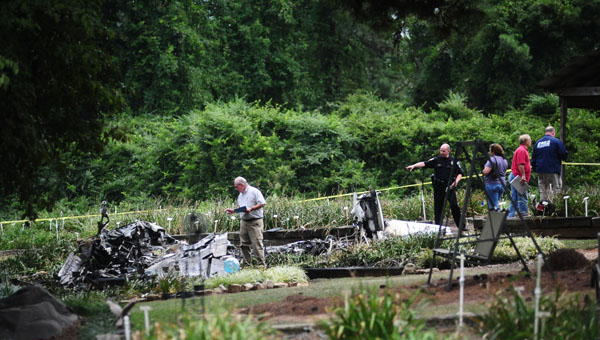 “At about 1:56 p.m. we were alerted by Shelby County 911 about a possible plane crash,” Helena Police Detective Sgt. Chris Rollan said.

Rollan said he didn’t yet know the plane’s intended destination nor the cause of the crash, but he said the investigation is ongoing and the Federal Aviation Administration is involved.

“There are no records that are able to be found right now,” Rollan said regarding the plane’s path of travel.

The plane’s four occupants have been identified as Dan, Andy and Sharon Smith, and a 17-year-old female whose identity has not been released due to her age. All are from Tennessee. Law enforcement officials confirmed all four sustained injuries during the crash.

“When the left they were alive, but their injuries are unknown at this point,” Rollan said, adding “one or two” were airlifted to UAB Medical Center.

Witnesses described what sounded like a large explosion when the plane hit the ground in the 4300 block South Shades Crest Road.

Duane Lovelady and Ralph Watkins were inside when the plane crashed into the back yard of the neighboring house.

“It sounded like an airplane hitting the ground and blowing up,” Lovelady said.

Watkins said he was unloading his laundry when he heard an “awful explosion” and saw a “big old thing of black smoke behind the building.”

While Watkins described the crash to a 911 operator, Lovelady ran down to the scene of the crash where he discovered the burning plane and injured occupants.

“I saw them all hanging out of the airplane,” Lovelady said. “It was burning, it blew up.”

“I grabbed her under the arms, I was so scared because she was in so much pain,” Lovelady said of the young female victim he pulled from the wreckage.

“I can’t believe they were still conscious,” Lovelady said. “I can still see the looks on their faces, I will never forget that.”

“We feel like they helped save the lives of the occupants,” Rollan said of the immediate action taken by Lovelady and Watkins.

“I just run down there and done it,” Lovelady said of his role in rescuing the occupants of the plane. “That’s all you can do.”