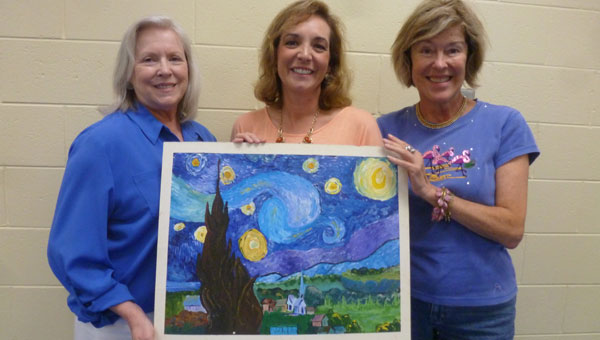 Judy Elliott, Columbiana Public Library Director Dutcha Lawson and Karen Jenson hold a copy of Vincent van Gogh’s painting Starry Night that will be the focus of a painting workshop August 21, 2014, at the library during the adult summer reading program. (Contributed)

The adult summer reading program kickoff starts Aug. 11, 2014, at 10 a.m. in the library’s conference room with “2001 A Space Odyssey,” director Stanley Kubrick’s 1968 classic, epic space film. The movie is one of the best known science fiction films of all time that won an Academy Award for Best Visual Effects.

The movie is slow moving, has very little dialogue but is known for its special effects depicting the vastness of space. The first spoken word is not heard until 40 minutes into the film to reflect the soundlessness of space. The film’s orchestral soundtrack uses the works of Richard Strauss, Johann Strauss, Gyorgy Ligeti and Aram Khachaturian. The movie is free and refreshments will be served.

Aug. 21 is a double-header with a business and entrepreneur workshop from 9:30-11 a.m. sponsored by Renasant Bank. The workshop will focus on networking and social media as Facebook and LinkedIn.

Lawson will present a Power Point presentation on the life of van Gogh, the Post-Impressionist Dutch artist who lived from 1853-1890. Tormented by mental illness, van Gogh painted “Starry Night” while residing at an asylum in Saint-Remy, France in 1889. Teresa Morton and Karen Jenson will lead a painting class using stiff brushes, acrylic paint, and 8-by-10-inch canvases as participants use Starry Night as their inspiration. A $5 donation for supplies is requested and registration is required (call library at 669-5812). Refreshments will be served.