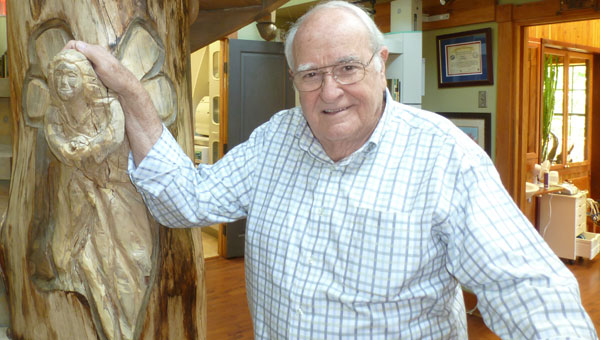 Dr. Mike Mahan, author of the historical memoir, “No Hill Too High for a Stepper: Memories of Montevallo, Alabama” with Norman McMillan, stands next to his “tooth fairy” carved into the tree in the center atrium of the Mahan Creek Dental Office in Brierfield. (Contributed)

Dr. Mike Mahan launched his new historical memoir, “No Hill Too High for a Stepper: Memories of Montevallo, Alabama,” at a book signing July 27 at the Fox and Pheasant Bed and Breakfast Inn in Montevallo.

The book, penned with Norman McMillan, traces Mahan’s life through the ‘30s, ‘40s and ‘50s focusing on Shelby and Main streets in Montevallo. The narrative is a reflection of small time life in a college town filled with art, music and literary influences.

The book is one in a series of “Voices Along the Trace” series of memoirs sponsored by the Cahaba Trace Commission and is published by New South Books.

Mahan’s life began, literally, in the tower room of the McKibbon House; a Victorian home built in 1900 on the corner of Boundary and Shelby streets in Montevallo. The only son of Stanley “Red” and Ethel Mahan, Stanley Michael Mahan Jr. was born on June 29, 1939, during the heights of the Great Depression.

Music was instrumental in Mahan’s life. His father who had a ninth-grade education was a barber by profession and a musician by vocation. He played mandolin and guitar in bands and instilled his great love of music to his son, a talented musician himself. Mahan grew up at 159 Shelby St. with great, life-long friends in the midst of professional offices and businesses.

Mahan graduated from Auburn in 1956 and UAB dental school in 1966. The original base structure of his dental office in Brierfield is a log cabin built in 1790 by long lost relative Anthony Mahan.

Mahan had the cabin moved from Tennessee after purchasing it from distant cousins. On March 3, 2006, an electrical fire destroyed the dental office, but parts of the log cabin were salvaged and rebuilt. The unique centerpiece of the interior atrium of the new dental office is a huge tree cut from the Brierfield Historical Ironworks State Park with a carved tooth fairy.

The office was dedicated in June 2007 as a reminder of Mahan’s motto, “No one cares how much you know until they know how much you care.”

The man behind Columbiana’s Trade Day