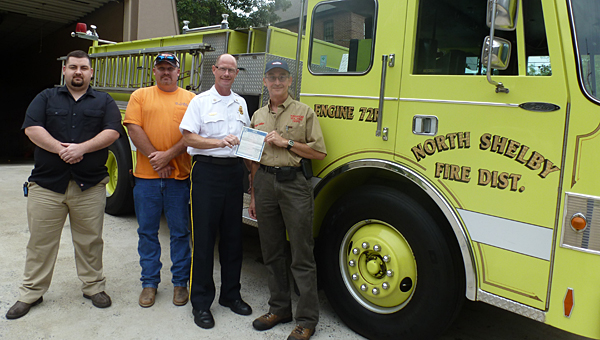 NORTH SHELBY – The North Shelby Fire Department has three stations covering 26 square miles: Station 1 at 4617 Valleydale Road; Station 2 at 4996 Caldwell Mill Lane at the crossroads of Caldwell Mill and Highway 119 and Station 3 at 400 Scotch Road near U.S. 280 and Meadowbrook.

Fire Chief Eugene “Buddy” Tyler, his team of firemen and paramedics and the board of directors are dedicated to providing the best quality fire and emergency medical service possible.

To provide the best service possible, North Shelby Fire recently purchased a new Pierce Velocity pumper at a cost of $448,000 which will be housed at Station 1.

Tyler, who has been fire chief at North Shelby since March 2012, has been a fireman for 29 years. He is also chairman of the Shelby County Fire and EMS Association, which consists of volunteer and paid fire chiefs in Shelby County. At a recent meeting, he mentioned that North Shelby was getting the new Pierce pumper and asked if anyone needed their old one.

“We are blessed at North Shelby Fire Department by our resources and in turn we wanted to bless someone else,” said Tyler.

Kingdom Volunteer Fire Department Chief Tony Miller was at that meeting and said Kingdom sure could use an upgrade. Kingdom services parts of South Shelby County including areas of Wilsonville, Columbiana and the Kingdom area, a rural area near County Road 28 and Highway 145. North Shelby blessed Kingdom donating their recently serviced 1987 Pierce Dash reserve engine.

“This new engine that is in great condition will replace our 1976 Pierce,” said Miller. “We have already stripped it and are ready to install the equipment as soon as we get this home.”

Miller has been a volunteer fireman since he was 18, and has been Kingdom’s Fire Chief for the last 15 years. There are 20 volunteer firemen at Kingdom. It is the “mission of the Kingdom Fire Department to protect life and property from the adverse effects of fires or exposure to dangerous conditions through fire suppression, rescue, disaster preparedness, fire prevention and community education.”

Chris Monceret, founder and executive director of the Community of Hope Health Clinic, was honored one of Positive Maturity’s Top... read more