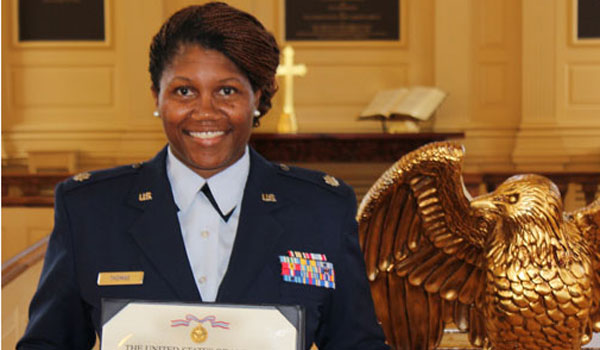 MONTEVALLO—Lt. Col. Patricia Thomas first visited the American Village in early May on a fieldtrip with her daughter, and was immediately impressed with the location.

“I really fell in love with the whole complex, especially the Veterans Shrine,” Thomas said. “I wanted to bring my family in to show them the facilities.”

When Thomas was awarded with the USAF Defense Meritorious Service Medal, she opted to have the pinning ceremony in the chapel of the American Village.

“We are honored to recognize her for her service to our nation,” Melanie Pool, director of marketing and communications for the American Village, said in an email.

Thomas, who was commissioned into the Air Force in 1996 at Grambling State University, joined the Air Force for a variety of reasons.

“I came in to enhance my leadership skills and to have a foundation for my family,” Thomas said. “I love serving my country.”

Thomas was awarded the USAF Defense Meritorious Service medal after she “distinguished herself by exceptionally meritorious achievement as Lead Acquisition Contracting Officer,” according to a narrative which accompanied the award of the medal.

“Colonel Thomas’ leadership was integral to the success of the North Atlantic Treaty Organization (NATO) Training Mission-Afghanistan,” the narrative said.

An officer from Maxwell Air Force Base and approximately 20 members of Thomas’ family attended the pinning ceremony at the American Village.

“The award ceremony was great,” Thomas said, noting her favorite part of the day was seeing the Veterans Shrine, where she and her sister, Lou Ann Malone who serves in the Mississippi Army National Guard, are listed in the Register of Honor.

“My family was in tears because it was so heart touching,” Thomas said. “It was monumental to say the least.”