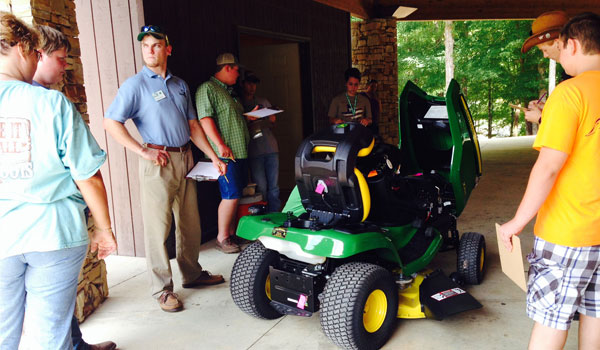 COLUMBIANA—Students from all over the state tended carefully to their grills during the Chicken-Que contest at the 4-H Competitive Events Day at the Alabama 4-H Center in Columbiana.

In the competition, students get four halves of chicken and must grill them to a safe temperature before judges taste the meat and score the students based on the appearance, taste and tenderness of the chicken.

“First and foremost, we’re looking for a properly cooked chicken,” David Self, a judge for the Chicken-Que contest said. “Appearance-wise, we want to see a nice golden brown hue. We also want a balance between heat and sweetness and a good mouth feel.”

Students crowded around their grills, carefully timing and turing their birds.

For Kiara Ward, a ninth-grader from Morgan County, cooking is a hobby that she loves.

“I like cooking at home for people,” Ward said. “It’s just a fun thing to do.”

Trevor Byrd, a tenth grade student from Marion County, said he was compelled to do the competition after looking over the list of events and finding one he liked.
“It just seemed like a fun one to try. I mean, you get to eat your food,” Byrd joked.

Blake McMahan from Limestone County said it was a love of the trade, which made him decide to compete.

The Chicken-Que contest was just one of 18 contests for students, with a large variety of events ranging from lawn tractor driving to quilting, photography to public speaking.

Approximately 120 students who won similar competitions at the county or regional level competed in the state event, according to Daniel Sullen who works with the 4-H program in Dallas and Perry County.

“It gives kids an opportunity to showcase their talents,” Sullen said.