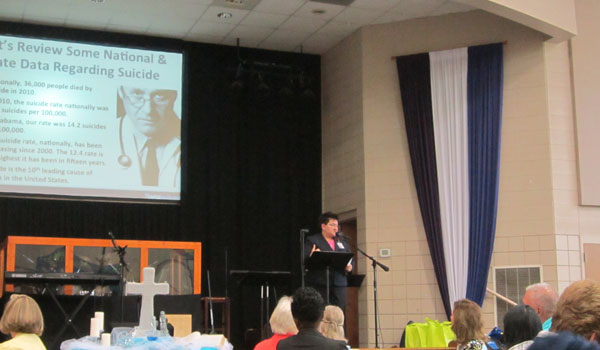 Baugh spoke on mental health statistics in the county, state and country and the need for the 20-bed inpatient psychiatric unit at Shelby Baptist Medical Center. (Reporter Photo/Ginny Cooper McCarley)

Baugh, who has more than 20 years of service in health care and formerly served as the Alabama Mental Health Commissioner, cited a number of statistics on mental health.

Suicide is the 10th leading cause of death in the U.S. and every 13.7 minutes someone commits suicide, Baugh said.

“Previously, (these patients) had to go to other counties for treatment,” Baugh said. “This can be hard on families who want to visit.”

Currently, the plans have been drawn and some preliminary work and construction has been completed. The unit is expected to be open the first week of January 2015.

“We’re very excited,” Baugh said. “We want to create an environment where people have hope. It’s truly an honor for us to be able to serve this patient population.”

Curry spoke in favor of the project during the luncheon.

“This is the beginning of what I believe is a major step,” Curry said. “To do this in a year deserves a lot of credit.”

Helena High School students catch up with friends and fill their new lockers on the Aug. 7 first day of... read more