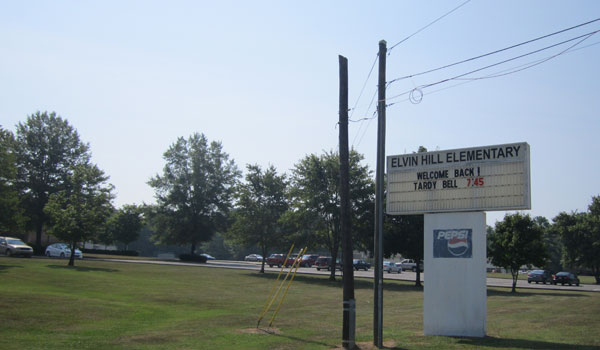 “It’s the excitement of a new day, a new beginning,” said Battle, who stood outside the school greeting parents and children as they walked in the front doors. “We haven’t had any tears yet.”

“She’s been nervous all morning, that’s what she told me,” her mom, Jean Smith said. “We’ve had a great summer.”

Emma Brown, who is entering first grade with a new pink zebra backpack, said she is excited about her teacher who is “really nice.”

Tyson Youngblood, a first-grader, has not met his teacher yet because his family was on vacation during the open house, but he’s excited to “just go into the classroom,” he said.

By 7:45 a.m., the halls were quite and kids were bent over workbooks with pencils in hand.

At Elvin Hill Elementary in Columbiana, the first day of school was also a success.

“It is absolutely wonderful,” said Elvin Hill Elementary principal Betsy Smith. “All the children are happily settled in their classes, and we have amazing teachers who are teaching them already.”

Smith did not see any tears from students but “there maybe were some tears from mamas,” Smith laughed.

“It has gone smoothly,” Nancy Vansant, secretary and media aid for the school said. “We’ve not heard any crying children anywhere in the building.”

Montevallo Elementary also offered support for kindergarten parents who were hesitant to leave the school, with a Comforting Coffee held in the library.

“We know it’s hard on parents to drop kids off on the first day,” Principal Dr. Allison Campbell said.

The day went “extremely smoothly,” Campbell reported. “We were very excited to have students back to see the upgrades. We had a lot of parents give a lot of compliments, and we got a lot of great feedback.”