Woman charged with using drugs while pregnant released from jail

COLUMBIANA – A 31-year-old Columbiana woman who has been charged with using multiple drugs while she was pregnant has been released from the Shelby County Jail after posting a $5,000 bond. 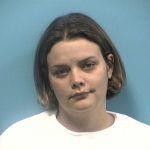 Christina Ann Ashworth, who lists an address in the 300 block of Vantana Drive in Columbiana, posted bond on Aug. 1, and is scheduled to appear in the Shelby County Courthouse for a preliminary hearing on Aug. 28, according to court documents.

The Alabaster Police Department arrested Ashworth on July 23 and charged her with one felony count of chemical endangerment of a child where a controlled substance is produced.

Chemical endangerment of a child where a controlled substance is produced is a Class C felony, according to Alabama law. If convicted Ashworth could face between one and 10 years in prison.

Alabaster students get settled into their desks on the first day of school on Aug. 7. (Reporter Photo/Jon Goering) By... read more