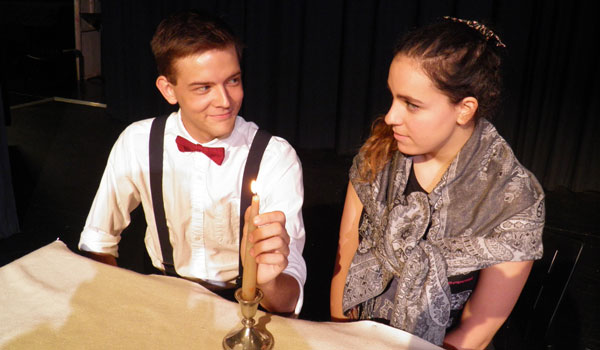 Dallas Nolen and Giselle Casadaban rehearse a scene from “The Glass Menagerie.” (Contributed)

MONTEVALLO—The Montevallo Main Street Players will perform “The Glass Menagerie” on Aug. 14-16 at 7:30 p.m. and on Aug. 17 at 2 p.m. at the Parnell Memorial Library Theatre.

“The Glass Menagerie,” written by Tennessee Williams, is set during the Great Depression. The play details the frustrations of Amanda Wingfield, a southern belle past her prime who lives an impoverished life in a St. Louis apartment with her crippled daughter, Laura, and her son, Tom. Her desire to marry off her daughter leads her to urge her son to invite a gentleman caller over as a prospective bridegroom, but things do not go as she hoped.

The play is direct by Leah Kirk, with cast including Diana Murphree from Pelham as Amanda, Giselle Casadaban from Helena as Laura, Michael Ross Tallon from Davenport, Iowa, as Tom, and Dallas Nolen of Hoover as Jim, the gentleman caller.

Ralph Voss, this year’s recipient of the Tennessee Williams Distinguished Scholar Medallion, will make comments on the play following the Aug. 17 matinee.