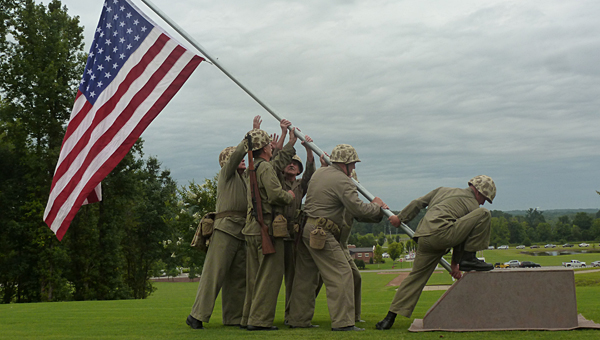 The Howlin’ Mad Smith Detachment, Marine Corps League reenacted the raising of the U.S. Flag at Iwo Jima at the Spirit of ’45 Day at the Alabama National Cemetery in Montevallo. (Contributed)

MONTEVALLO – In 2010, the U.S. Congress and U. S. Senate unanimously passed Concurrent Resolution 226 declaring the second Sunday in August as “Spirit of ’45 Day” to commemorate Aug. 14, 1945, the end of World War II, and to honor the war’s veterans.

More than 400,000 Americans gave their lives during WWII. The men and women who survived endured the Great Depression, fought and won WWII and rebuilt America are known as the “Greatest Generation.”

“Whereas the entire World War II generation, military and civilian alike, has provided a model of unity and community that serve as a source of inspiration for current and future generations of Americans to come together to work for the continued betterment of the United States and the world,” stated Resolution 226.

Retired Col. Bob Barefield, chairman of the Support Committee of the Alabama National Cemetery, organized the local “Spirit of ’45 Day” held on the hill by the huge flag pole overlooking the Alabama National Cemetery, the 479-acre national cemetery located in Montevallo next to American Village. Pam Nichols, co –director of Honor Flight Birmingham, was mistress of ceremonies. The invocation was led by Duke Martin, first vice chair of the cemetery support committee.

Mr. Marion “Pete” Edwards, age 93, presented the WWII memorial wreath. Edwards served in field artillery in the Army 35th Infantry and landed on Omaha Beach during D-Day. He fought in five major battles from the Battle of Normandy to the Battle of Bulge. At war’s end, he was 40 miles from Berlin. Following the wreath laying, Butch Glass of Lovebirds, Inc. released doves which circled multiple times the area.

The music trio, Homeland, entertained with patriotic music including the fight songs of each armed service. As their corps’ song was sung, all veterans attending stood to attention to the music of their corps. Alabama State Representative District 46 Paul DeMarco read Gov. Robert Bentley’s proclamation. Rachel Clinkscale, past national president Gold Star Wives of America who lost her husband during the Vietnam War, played the part of Edith Shane, the nurse that was kissed by the sailor in the memorable photograph of V-J Day in Times Square by Life’s magazine photographer Alfred Eisenstaedt.

In an effort to expand the opportunity for bowhunters to harvest more deer within Oak Mountain State Park near Birmingham,... read more