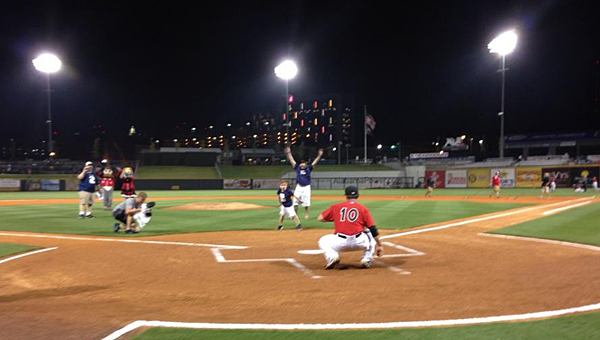 BIRMINGHAM — At about 8 p.m. on Aug. 8, 9-year-old Gabe Griffin strutted to the pitcher’s mound at Regions Field. After taking several steps forward, he wound up, and then released.

“He dadgum fires that ball!” recalled Scott Griffin, Gabe’s father. “It was a strike down the middle! It was a great moment.” It was a moment that drove duchenne muscular dystrophy to warm the benches beneath the combined applause of Birmingham Barons and Huntsville Stars players and fans.

Duchenne muscular dystrophy is a muscle-deteriorating disease typically passed down genetically. Victims are usually confined to a wheelchair by age 12, and are not expected to live far beyond the age of 20.

One in every 3,500 boys suffers from Duchenne, including Gabe Griffin.

But Griffin and his family are fighting back.

Scott and Traci Griffin founded Hope for Gabe to not only combat Duchenne by raising awareness and funds to aid research for a cure, but also to leave an impactful legacy for their son and the brother of their three other children.

The opening pitch for the Birmingham Barons is merely one example of the extraordinary efforts made by those touched by the boy’s story.

Although the weather prevented full attendance to the sold-out stadium and forced a delay, hope delivered.

“I was worried at the beginning,” said Scott Griffin. “But as God would have it, he cleared the clouds.”

Besides providing a solid first pitch to the game, the beaming Gabe Griffin circled the field in the Ride4Gabe SUV donated by Pelham’s Donahoo Auto.

“We accomplished everything we wanted to for the event,” his father said.

Many donations were made to Hope for Gabe, and through the guidance and support of general manager Jonathan Nelson, the Birmingham Barons helped raise a greater awareness of Duchenne to the people of Birmingham.

Ride4Gabe, which is Hope for Gabe’s cross-country bicycle campaign ride, has been the organization’s primary focus and voice since June 28.

According to cyclist Wes Bates, the team of riders, accompanied by several local volunteers, pedaled a more leisurely 33-mile course toward Alabaster and back through Oak Mountain State Park on Aug. 9.

However, the actual 3,360-mile Ride4Gabe from Astoria, Ore., was scheduled to conclude Aug. 14 at the battleship U.S.S. Alabama at Memorial Park in Mobile, Alabama.

For more information about or to make donations to Hope for Gabe, visit Hopeforgabe.org or Ride4gabe.com.