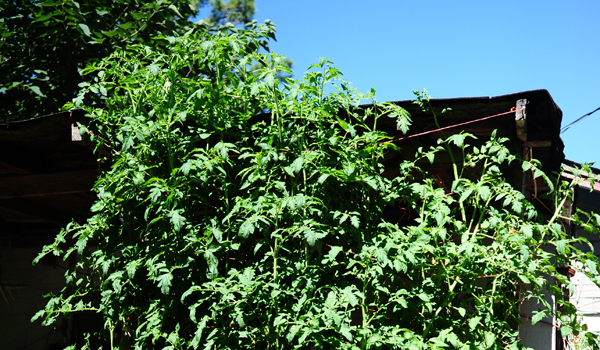 Flora Vining’s tomato plants have grown past the top of her house. (Reporter Photo / Jon Goering)

COLUMBIANA—Flora Vining had no idea tomato plants would soon dwarf the house when her granddaughter brought home four Better Boy tomato plants about two months ago.

“I didn’t dream about them getting that big, no way,” Vining said.

The tomato plants, which are approximately 10 feet tall, are “still growing taller,” Vining said, noting that since the stalks have surpassed the roof there is now no way to tie the plant to keep it upright.

“They said it’s like Jack and the beanstalk,” she joked. “Everybody comes here and says, ‘Oh, I’ve never seen them that tall before.’”

The plants have produced a plethora of green tomatoes, but none of the fruit has ripened yet. However, Vining anticipates having tomatoes in the upcoming weeks.

Vining said there is no secret to the growth, and noted that the enormous plants have received no special treatment except for water every other day.

Vining, who has lived in Columbiana for more than 60 years, said she always had a garden with okra, tomatoes and peppers, but when she moved into her current house she did not have the space for many vegetables.

“I probably won’t ever plant another one that will get this big,” Vining said.

It’s all in the family at Emily’s Heirloom Pound…