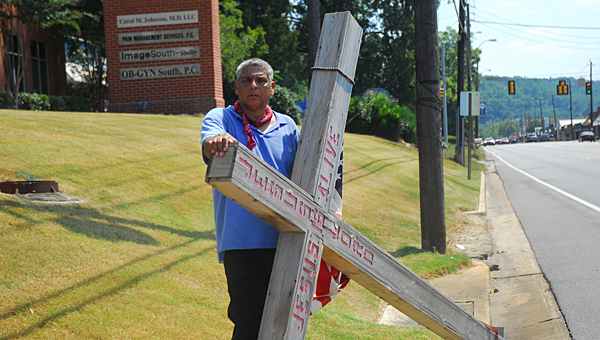 ALABASTER – In the nearly 1,000 miles Kerrville, Texas, resident Art Robles has walked over the past several months, he admitted the terrain in Mississippi and Alabama has been the most challenging.

“All those hills have been beating me up,” Robles said with a laugh as he prepared to walk in front of Alabaster’s Shelby Baptist Medical Center at about 2:15 p.m. on Aug. 16. “I started in September of last year, and I’ve been through rain, ice and the snowstorms. But God has been so good.”

Robles, the pastor of the Cross Ministries Church in Kerrville, struck out last year on a 1,673-mile journey from Texas to Washington, D.C., to pray with President Barack Obama at the White House.

Throughout his journey, he is carrying an about 100-pound wooden cross with a small wheel at the base. Compartments in the cross hold his necessities for the journey, one side of the cross reads “Jesus is alive, Jesus is Lord,” and an American flag hangs from the back of the about 10-foot-tall structure.

After leaving Kerrville, which is about 65 miles northwest of San Antonio, Robles walked around San Antonio before following Interstate 10 around Houston, into Louisiana and through Jackson, Miss.

Robles entered Alabama on U.S. 80, and currently is walking along U.S. 31. Once Robles walks through Birmingham, he will take U.S. 78 to Atlanta before continuing north to Washington.

Robles decided to embark on the journey after attending a revival in Lubbock, Texas last year.

While Robles was walking in front of the Hillside Medical Plaza on U.S. 31 in Alabaster, one woman stopped to give him a large cup of sweet tea, another stopped to pray with him and a few passing motorists honked and waved at him.

“I think I’ve got about 750 more miles to go. God has always taken care of me,” Robles said, noting he has had a place to stay each night. “Some stop and talk, some say thank you and some people think I’ve lost my mind.

“But the important thing is, I’ve seen 40 people give their life to Jesus, and I’ve seen seven miracle healings,” he said.