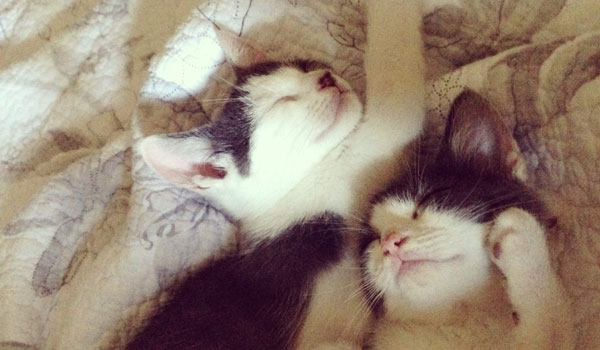 Lilac and Linus, finalists in The Friskies 2014 challenge, snuggle on the bed (Contributed)

COLUMBIANA—When University of Montevallo student Sara Frye decided to foster kittens from Shelby County Humane Society, she had no idea two of her fosters—Lilac and Linus—would be stars.

Frye, who graduated from the university in August with a bachelor’s degree in interdisciplinary studies and library science, fostered eight kittens during the summer after volunteering with the SCHS.

Frye discovered The Friskies 2014 challenge on the social-media site Instagram and decided to enter a video of Lilac giving Linus a bath with kisses.

“I was just lounging with the kittens and Lilac started bathing Linus,” Frye explained. “She was just going to town. They would bathe each other and cuddle a lot.”

The video, “Lilac Giving Brother a Bath,” was selected as a finalist from thousands of entries for The Friskies 2014 award. As a finalist, Frye won a year’s worth of cat food, which she donated to the SCHS. She also won a trip to Los Angeles, where the winners of the challenge will be announced.

Fostering Lilac and Linus, who have both since been adopted, was a great experience, Frye said.

“They loved each other and they loved me. Overall, it was just a great experience,” Frye said.

To view all of the finalists’ videos and vote, visit Thefriskies.com. For each vote, one can of Friskies wet cat food is donated to a shelter partner, up to 250,000 cans and a monetary donation of more than $20,000 to shelter partners.

Lions ready to pounce in jamboree