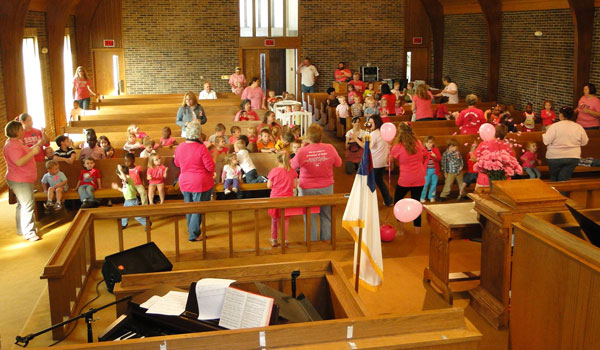 CALERA—The city of Calera and the Breast Cancer Research Foundation of Alabama will team up during breast cancer awareness month in October to present “Paint Calera Pink.”

The program, which is in its fourth year, has allowed the city to raise more than $77,000 with the Calera Goes Pink! community effort.

“The dollars that you’re giving for this stay in Alabama,” Event Coordinator Kate Kiefer, noting the Breast Cancer Research Foundation of Alabama gives the money to UAB to use for research.

The community will host a variety of events to raise money. On Sept. 19, community members are encouraged to support the Calera High School football team as they take on Jemison High School. Before the game, pink balloons will be released to commemorate those who have died or survived breast cancer.

On Sept. 20, the Calera Youth football program will take on West Blocton, and everyone is encouraged to wear “Calera Goes Pink” t-shirts. Sponsorships are available for both games.

“Calera Goes Pink” t-shirts are $12 and can be ordered at all Calera schools as well as City Hall. Orders must be received by Aug. 22 to be guaranteed prior to the Sept. 19 football game.

In addition, a “paint the town pink” decorating contest will be held Friday, Sept. 19. The entry fee is $25 per business and displays will be judged by Calera Mayor Jon Graham and High School Principal Joel Dixon.

“We’ve already got plans in the works (for our decorations),” Calera Chamber of Commerce President Holly Stanley said of Mutual Savings Credit Union. “We’re already getting our ideas together.”

The fourth annual “Calera Goes Pink” golf tournament will be held Sunday, Oct. 19 at 1 p.m. at Timberline Golf Club. Sponsorships start at $50, and there are opportunities for sponsors to have two or four player teams.

Kiefer emphasized the importance Calera’s donation makes towards finding a cure for breast cancer in conjunction with UAB’s research program.

“Calera is truly making an impact throughout the world,” Kiefer said.

The Alabaster Police Department has reported two guns were stolen from an unlocked car on Aug. 18. (File) By NEAL... read more